Tucked away in the Salt Lake Valley, and hidden underneath 72,000 sqft of manufacturing space lies the SilencerCo Batcave.  Located beneath the manufacturing floor is a massive collection of firearms inside a range spanning 75 yards.  During a recent visit, TFBTV’s very own James Reeves and I had an opportunity to tag along and photograph this massive collection.

Built, designed, and tested (all under the same roof) the SilencerCo facility houses a massive supply of machinery, silencers, and test firearms. 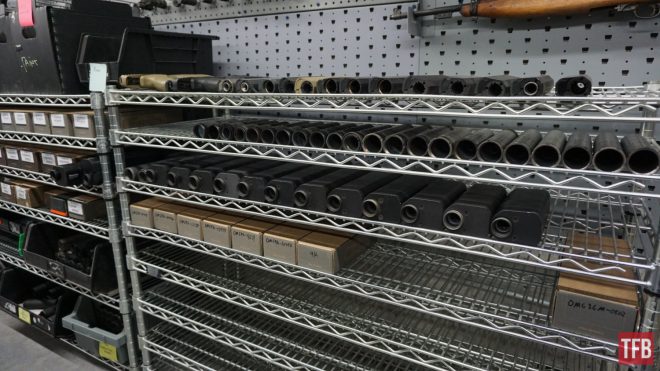 Founded in 2008, SilencerCo has made a name as one of the key innovators in the silencer market.  They manufactured the first non-round pistol silencer with the Osprey, the first modular shotgun silencer with the Salvo 12, and the integrally suppressed Maxim9 pistol. 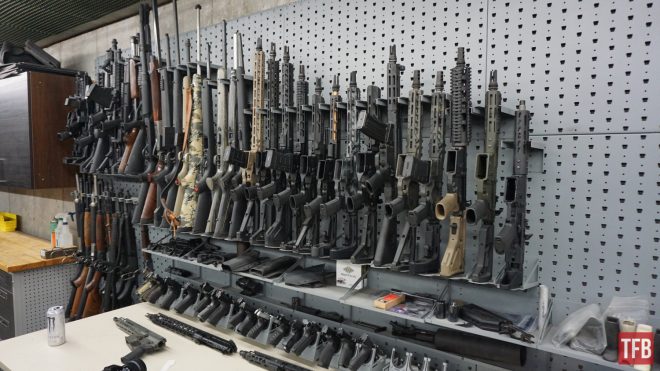 The Batcave (as I like to call it) houses a massive collection of firearms used during silencer design, development, and testing.  This included spare parts and tools for prolonged service on this heavily used collection. 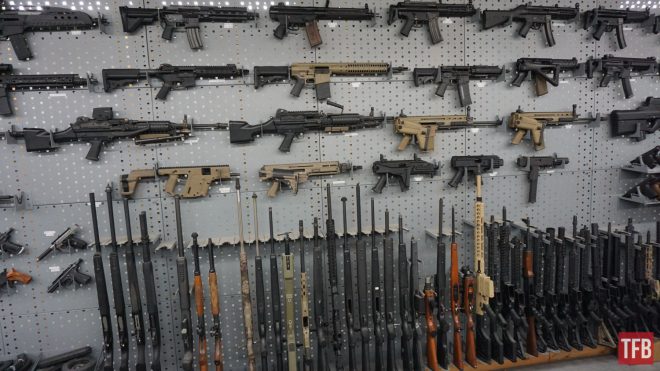 This collection, however, is far from what I would consider ordinary.  The walls and workbenches are meticulously organized with firearms from various manufacturers in a wide variety of calibers.  If I thought it they might have one, they did.  Everything from bolt action rifles to belt-fed machine guns adorned these walls. 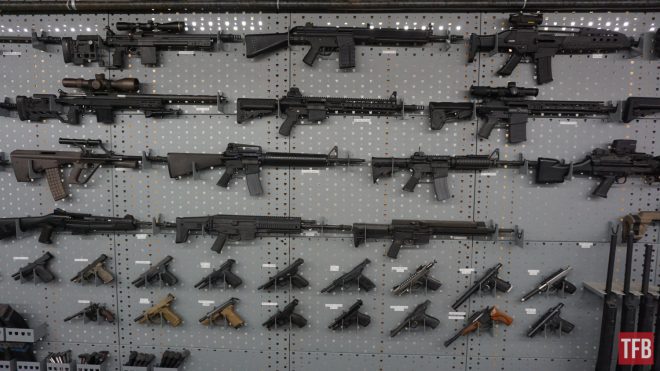 While there certainly were rifles like this M16 or M4 I would expect to see, I was certainly not expecting to see others like the Tommybuilt XM8 Clone sitting above a Knights SR-25.  They even had a suppressor-ready Steyr AUG.  Not something often seen due to the unique 13x1LH threaded muzzle. 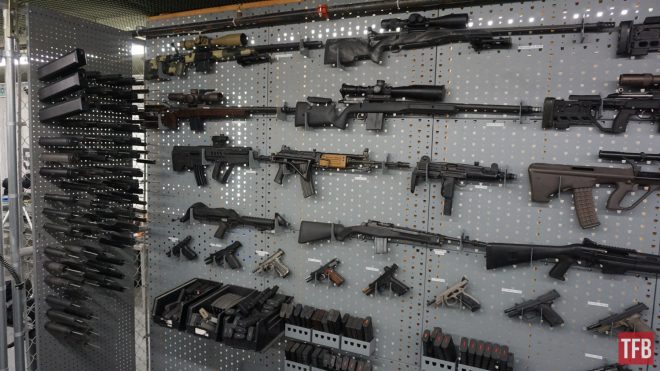 It’s about as eclectic as firearm collection can be, and with a level of organizational OCD that can only be admired.  This broad collection wasn’t limited to just firearms.  Various high-end optics from companies like U.S. Optics, Leopold, and NightForce adorned their custom precision rifles. 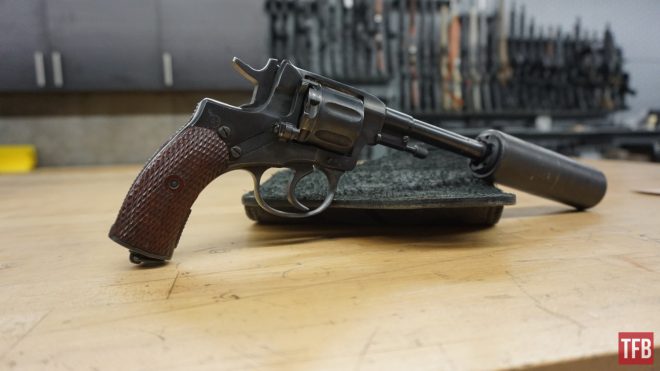 Certainly, I could spend an entire week taking photos in the Batcave, but here are a few interesting firearms from their collection that caught my eye.  It’s certainly not every day that you see a 3-lug equipped suppressed Nagant revolver. 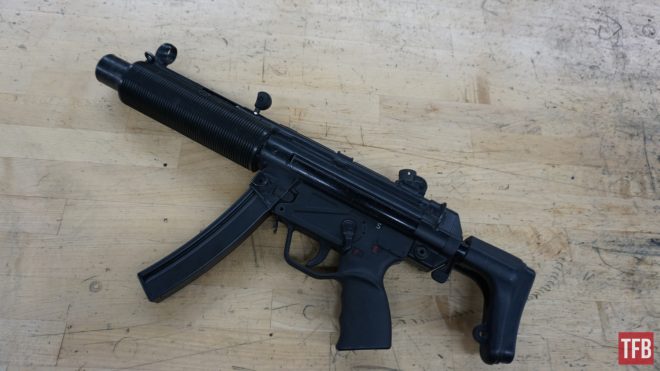 I was pleasantly surprised to see the trademark SilencerCo MP5SD hanging on the wall.  This gun fooled me into thinking it was an original MP5SD many years ago at a range day. 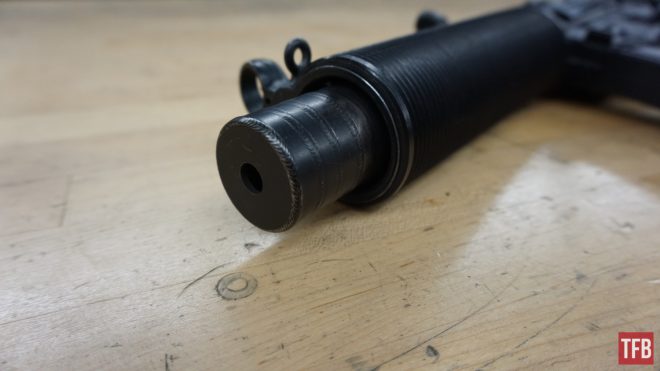 SilencerCo took the MP5SD handguard and tucked their Omega 9K suppressor under it.  The end result is an even shorter MP5SD clone with the same aesthetic while being even quieter than the original.  I’ve had a chance to shoot this gun on several occasions and it’s an absolute joy. 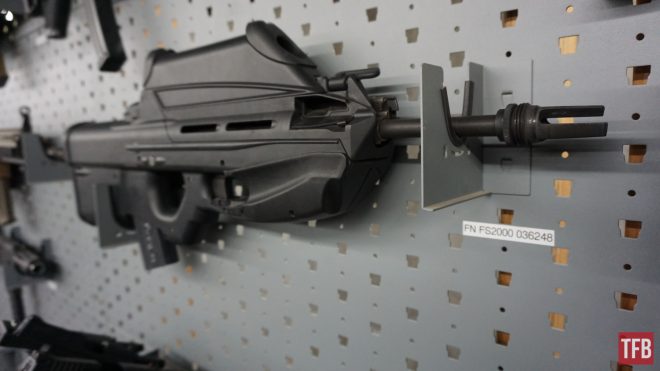 While there are certainly plenty of firearms in this collection you might see at your local range, others like this optical sight equipped FS2000 are seldom seen nowadays.  As production of the FS2000 has now stopped, the prices on these rifles have steadily risen, and I’m sure this optic equipped version is worth a pretty penny. 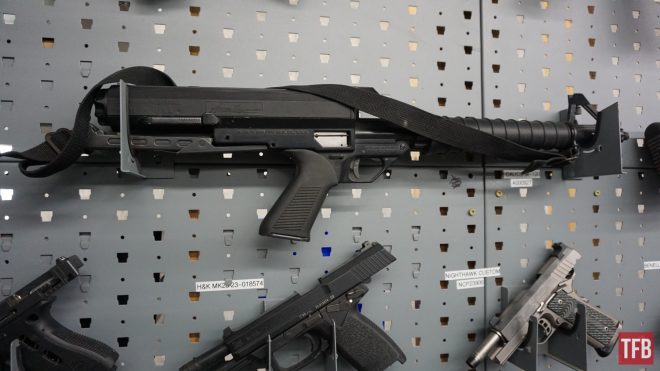 Another rifle I certainly did not expect to see was this .22LR Calico M-100 (sitting above and HK Mark 23 of all things).  As SilencerCo was built upon the .22LR Sparrow silencer, it should come as no surprise they had more than a few cool 22’s in the mix. 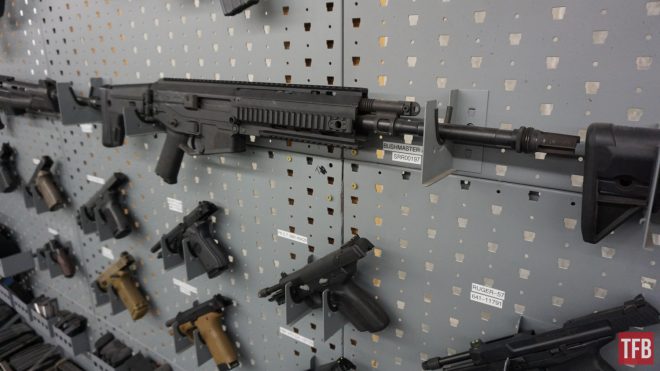 Last but not least was this original Bushmaster ACR.  I’d actually never seen the Bushmaster variant (only the Remington ACR) as the design and rights have changed hands over the years. It’s certainly not a firearm you see often, and I was surprised to see it in this working collection.

So what led me to the Batcave with James Reeves?  Well if you haven’t seen the below video on the best suppressor for the AR-15, it’s certainly worth a watch.

We are committed to finding, researching, and recommending the best products. We earn commissions from purchases you make using the retail links in our product reviews. Learn more about how this works. Source: https://www.thefirearmblog.com/blog/2021/06/04/behind-scenes-silencerco-batcave/?utm_source=rss&utm_medium=rss&utm_campaign=rss