Headstamp Publishing Launches Kickstarter for Pistols of the Warlords

Headstamp Publishing has announced Ian McCollum, of Forgotten Weapons fame, new book ‘Pistols of the Warlords – Chinese Domestic Handguns, 1911 – 1949‘. The new book comes hot on the heels of the shipping of their latest book Thorneycroft to SA80: British Bullpup Firearms, 1901 – 2020, by Jonathan Ferguson – our full review of which is coming soon!

Ian has worked on several books before and Headstamp published his first book Chassepot to FAMAS: French Military Rifles, 1866–2016 back in 2017. His new book examines the curious world of Chinese pistol manufacture during the turbulent period in the 20th century when China was controlled by warring warlords. These quirky craft-built pistols are often copies of Western designs complete with idiosyncratic stamped markings – many spelling company or model names wrong.

As an added perk Headstamp are also reprinting Dolf Goldsmith’s monograph on Chinese Mauser rifles of the same period, originally printed in the mid-1990s, Arming the Dragon, is one of the few books on the topic and now very difficult to get hold of.

Leveraging access to several substantial collections of the pistols, the book will examine over 300 examples of the Chinese pistols. Headstamp have set up a Kickstarter page here. 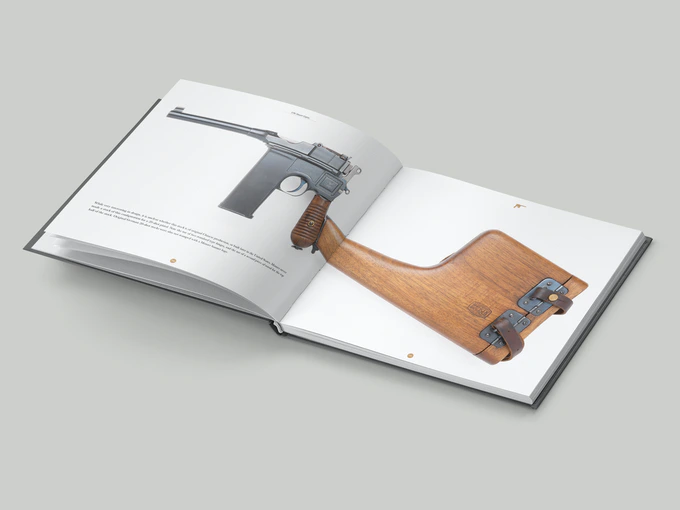 Here’s what Headstamp have to say about the new book:

Headstamp Publishing is excited to announce the third in our flagship series of books, Pistols of the Warlords: Chinese Domestic Handguns, 1911 – 1949, authored by Ian McCollum. We are offering several beautiful editions, as well as Kickstarter-exclusive rewards. We will also be giving backers exclusive access to behind-the-scenes content, and we have set several stretch goals which will help us to make quality and content improvements to the book.

With your help, we can build on the success of our prior two campaign, Ian McCollum’s Chassepot to FAMAS: French Military Rifles, 1866–2016, which was at that time the second-most-funded Kickstarter publishing project, raising more than US$800,000, and Thorneycroft to SA80: British Bullpup Firearms, 1901 – 2020, by Jonathan Ferguson, which was another smashing success, raising US$579,000. Your support was vital in the success of these books, and we hope to continue to bring you further best-in-class publications. We have also worked hard to improve our printing and fulfilment processes. As we continue our work toward establishing a new gold standard for firearms reference books, we invite you to join us on the journey.

Pistols of the Warlords is a departure from our previous titles in that it is less of an archival reference work and more of a photographic exploration of hundreds of different examples of Chinese pistols. Details of production and history are included where possible, but the vast majority of these pistols are true mysteries, with no known surviving documentation even in China. Rather than allow these obstacles to relegate them to obscurity, we decided to produce a book with everything that is known, to categorize the different design classes, and give collectors and historians a basis to begin understanding these fascinating firearms.

A beautiful reference work intended for all those interested in the history of China and of handgun design, it offers the only formal study ever made on the subject. The manuscript is complete, photography has been finalized, and the images have been prepared for print, and layout and final editing are in the final stages. At this stage, it is our great pleasure to offer the book for pre-order via Kickstarter. This is a book for enthusiasts, researchers, historians, and collectors, and it is as much an authoritative historical work as it is a work of art.

Ian shared a video introducing the book on his channel:

Check out the Kickstarter page for Pistols of the Warlords here.