CZ has just announced their newest version of the P-10 pistol, the P-10 M, which is configured as a “micro-compact” pistol marketed for concealed carry. The CZ P-10 M is imported from the factory in the Czech Republic, which released this model last year overseas. The M model of the P-10 family has a capacity of 7(+1) rounds. Interestingly, CZ opted to omit the usual external controls such as a slide stop and safety, save the trigger and magazine release. The new CZ P-10 M is also marketed as being very simple to disassemble for cleaning, just by removing the take-down pin. CZ also reduced the P-10 M’s width to one inch, which is a quarter of an inch slimmer than the rest of the P-10 series. CZ’s description of the CZ P-10 M can be read below.

CZ-USA has announced a new era in concealed carry pistols with the much anticipated micro-compact P-10 M pistol release. This gun has everything people love about CZ pistols while being engineered explicitly for flawless concealed carry.

The first thing most people notice about the P-10 M is its completely smooth appearance. There are no
controls or levers on either side of the gun other than the magazine release.

The P-10 M is also a snap to disassemble for cleaning. Remove the take-down pin from the frame, and the slide comes right off. Since self-defense situations can arise at any time or place, the P-10 M comes standard with a set of robust 3-dot sight. 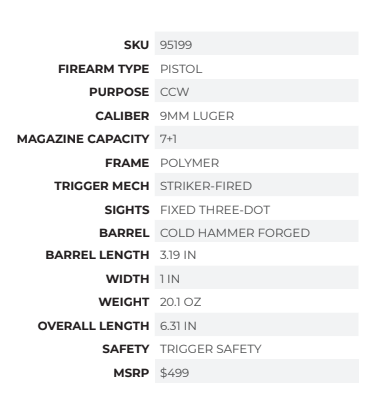 CZ-USA filled TFB in on a few more particulars that readers are sure to ask. The P-10 M pistol will ship with two seven-round single stack magazines, while extra magazines will have an MSRP of around $35. The slightly staggered single stack magazines are proprietary, so standard P-10 magazines will not fit the P-10 M and vice versa. Despite the lack of an external slide stop, that function still takes place internally after the last round has been fired. Once a new magazine has been inserted, the shooter will need to pull the slide rearward and release it to allow the recoil spring to return the slide into battery (aka the slingshot method).

What do you think of CZ’s new P-10 M pistol? Tell us your thoughts on the lack of a slide stop. Stay tuned to TFB this afternoon for another CZ announcement.