In recent years PCC or pistol caliber carbine has rapidly exploded into popularity in the competition scene with many enjoying it for its ease of entry and fast pace.  For a long time direct blowback guns like CZ Scorpions, AR9’s and gas-operated rifles like the SIG Sauer MPX reigned supreme in the division but JP’s newest offering, the JP5, takes the cake when it comes to high-end PCC’s for competition.

JP5 side shot after testing

While JP Enterprises’ previous PCC, the GMR15, was a direct blowback, their newest offering is a roller delayed blowback similar to the MP5.  A smart choice by the design team since roller delayed is considered one of the best and softest shooting of the delayed blowback systems available.  The similarities between the JP5 and MP5 are more than surface deep, however, as the JP5 can accept certain MP5 parts.  JP plans on offering high-end versions of the compatible parts but states that OEM parts will function reliably in the rifle. 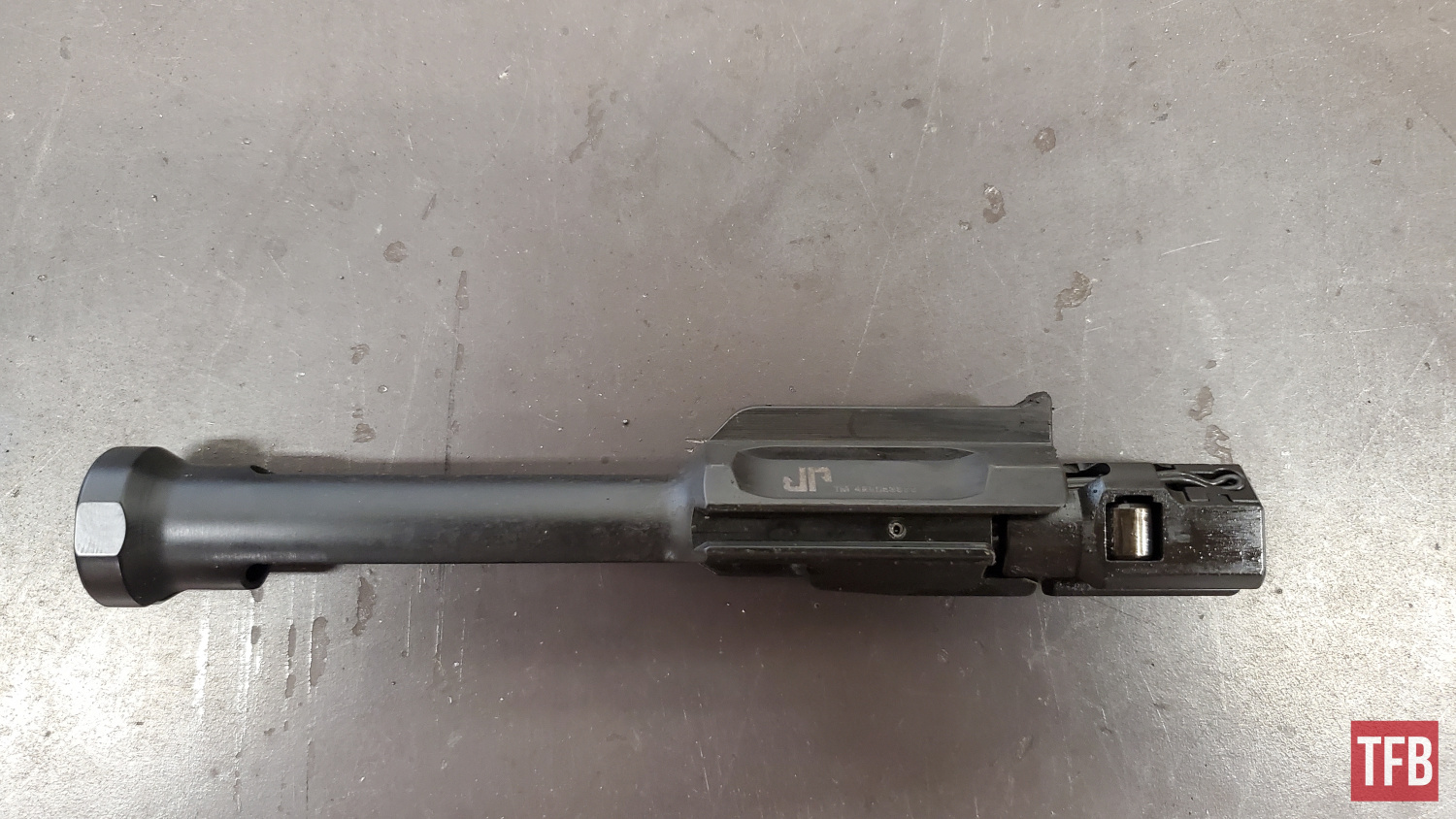 As anyone who shoots pistol caliber carbines a fair amount can tell, your direct blowback tends to be snappy and jumpy even with compensators.  The choice to use a roller delayed system allows for a light rifle that hardly jumps when fired.  The JP5 has a gentle short recoil impulse that rocks perfectly back into zero allowing extremely fast follow-up shots, rapid movement and strings of fire were easy with the JP5. 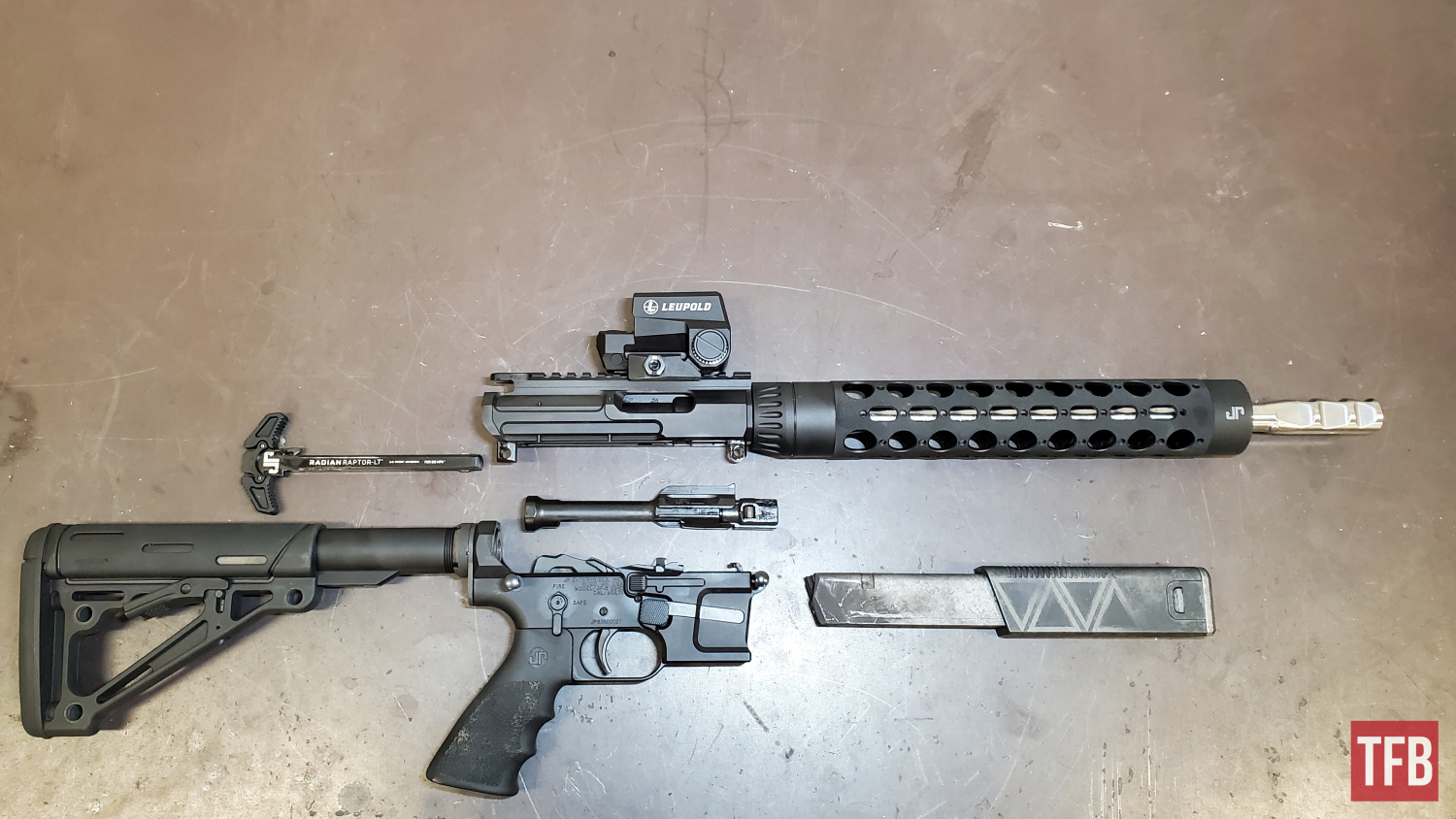 Upon receipt of the rifle, I took it to sight it in at 25 yards. Using 124 gr Blazer ammo, it grouped approximately 1.1 inches at 25 yards using a red dot off a rest.  This is more than accurate enough for a 9mm carbine and the rifle had no issues reaching out to 150 yards and ringing steel gongs.  My review sample preferred 124 gr ammo grouping tighter than 115 gr. 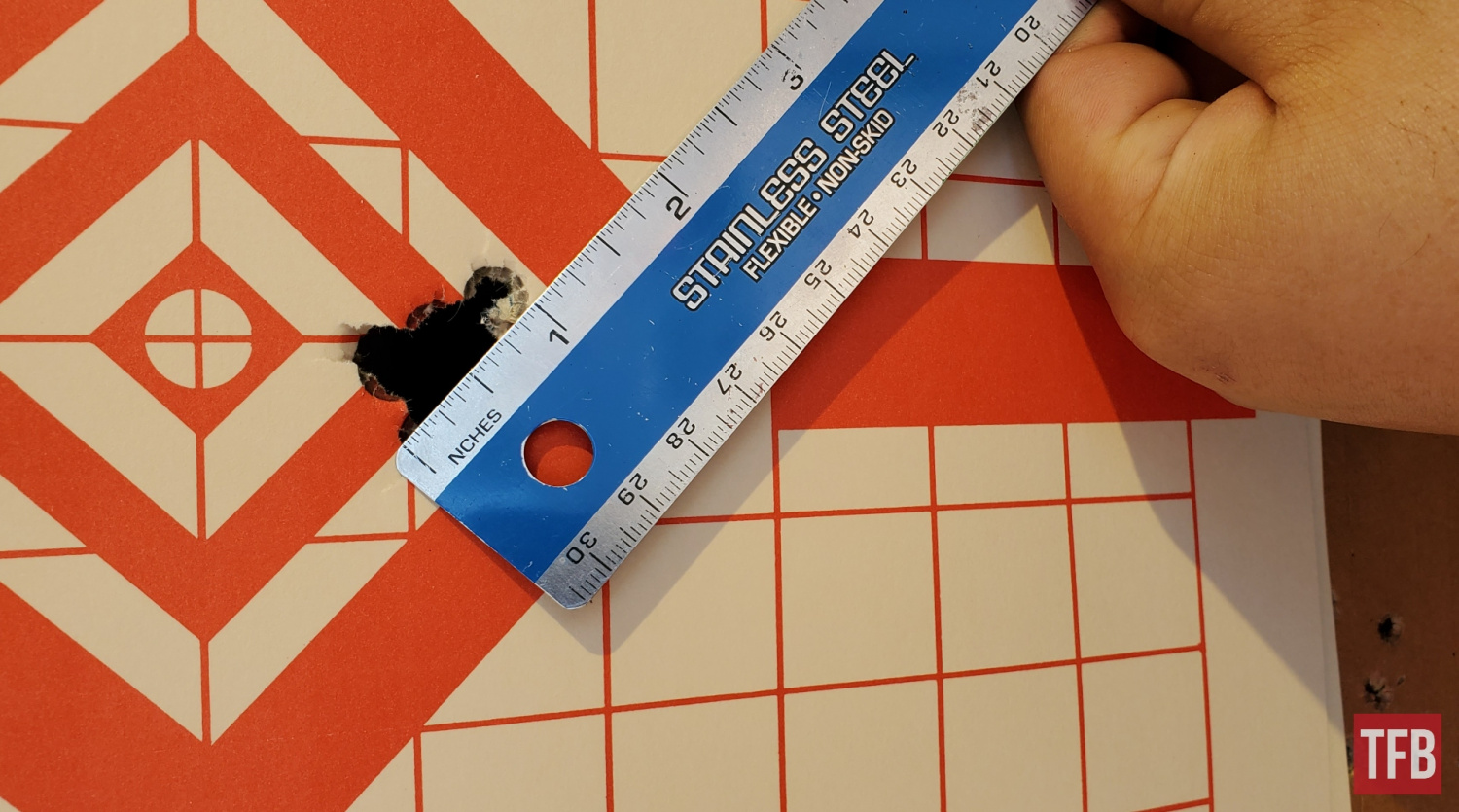 The rifle shipped to me with a 90-degree locking piece which JP configured to allow maximum reliability with all types of ammo from soft competition ammo to higher power ammunition.  JP informed me that upon further testing, all rifles shipped out in the future will come with 80-degree locking pieces which they have found to be the sweet spot for reliability with all types of ammo while still offering the lowest recoil impulse. They state as you go up in angle, the applicability is more and more towards shorter barrels and won’t be as applicable to a competition shooter.  Some shooters might opt for the 70-degree locking piece, which is useful for high-pressure loads with 8″ or longer barrels.  This would allow it to cycle standard and high-pressure loads reliably but won’t be as reliable with lower pressure ammo like Federal Syntech.  JP will offer replacement locking pieces for tailoring your rifle to your ammunition and configuration. 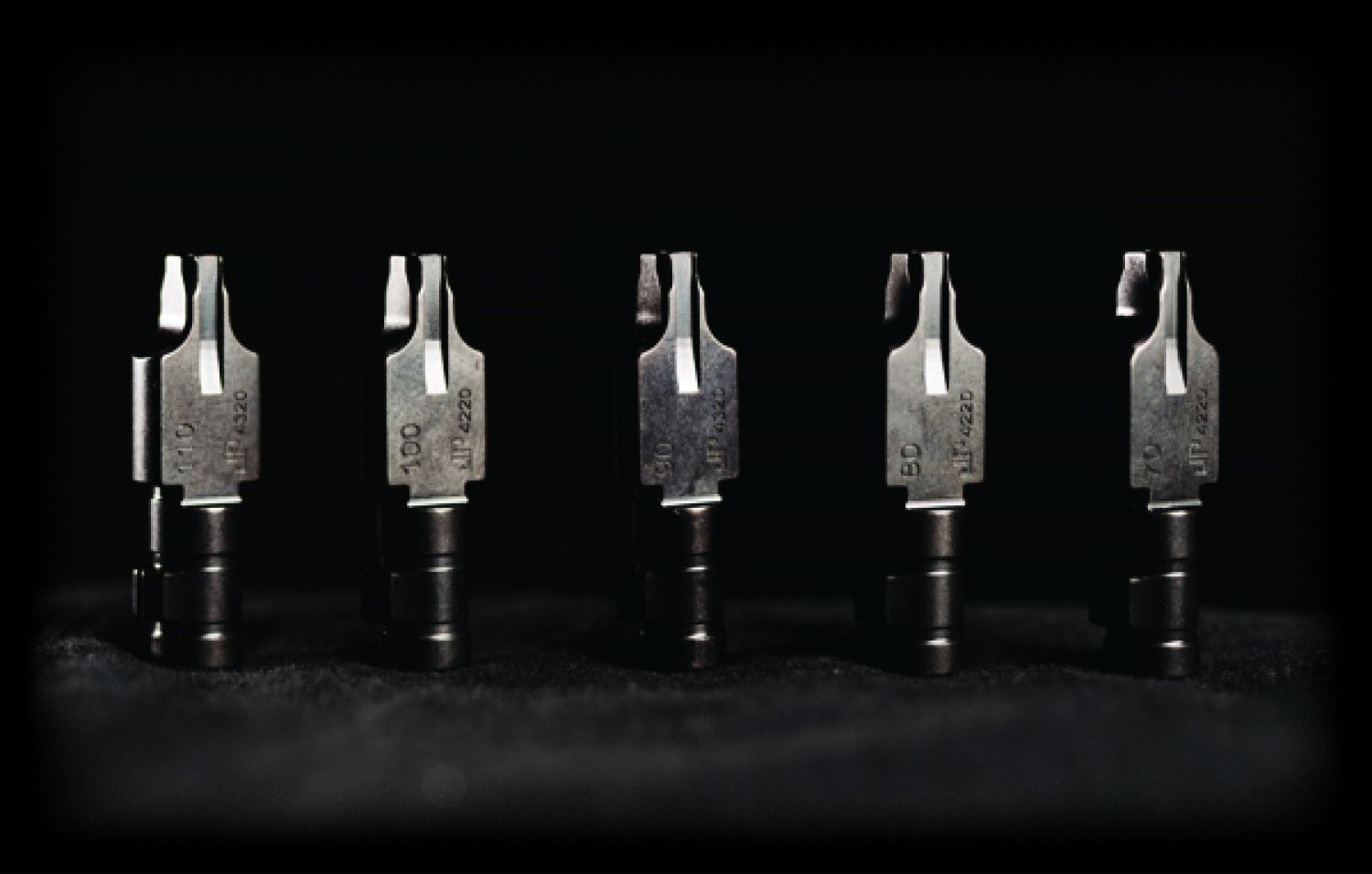 Taking the JP5 out to a local steel match it becomes apparent how much engineering must have gone into the rifle. As light as it is, transitions between targets are fast and precise, the recoil impulse is short and gentle but lacks the rocking sensation many other firearms with roller delayed systems suffer from i.e. the MP5.  Much of this has to do with the inline stock and 3-port compensator.  What this translates into is a fast, easy-to-use rifle that feels like cheating when using it at a match.  Transitions between targets were fast and easy, the lightness of the rifle means it moves easily and naturally.  If I had more time with the rifle I’d like to try a USPSA match but I digress. 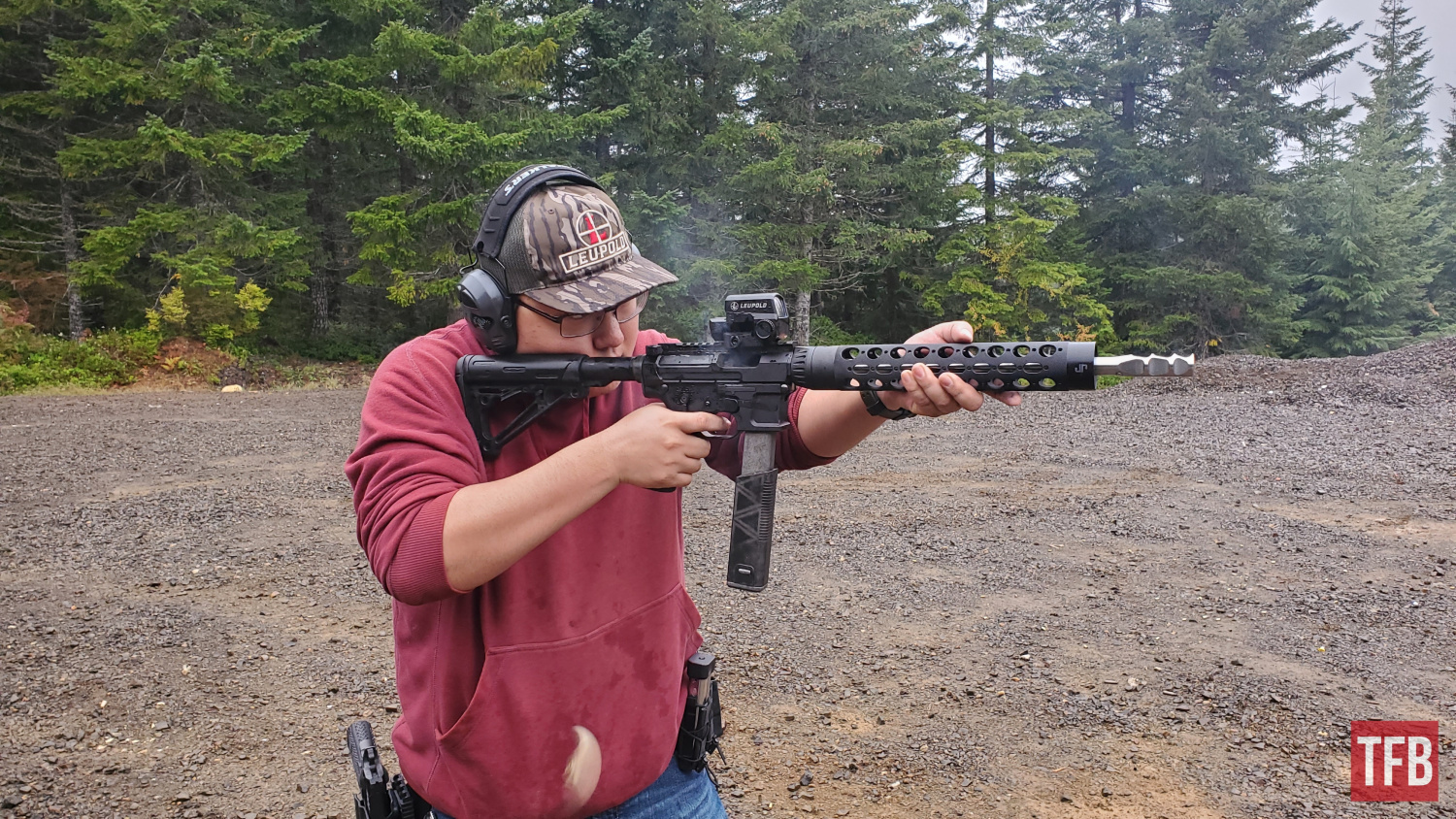 Although I mainly envision this rifle used for steel challenge, the controls and ergonomics would lend themselves to USPSA style action matches as well.  A generously flared magwell allows for fast and precise reloads while the ambidextrous bolt release allows for fast return to ready.  Control placement is natural and easy to find even for someone not familiar with ambidextrous controls and my shooting buddies were able to pick up the motions fairly quickly.  The trigger that comes in the JP5 is a JP enhanced reliability trigger group which on my scale weighed a consistent 4 lbs with a crisp clean pull with a very clear reset.  The trigger is just another part of the JP5 that allows it to run fast. 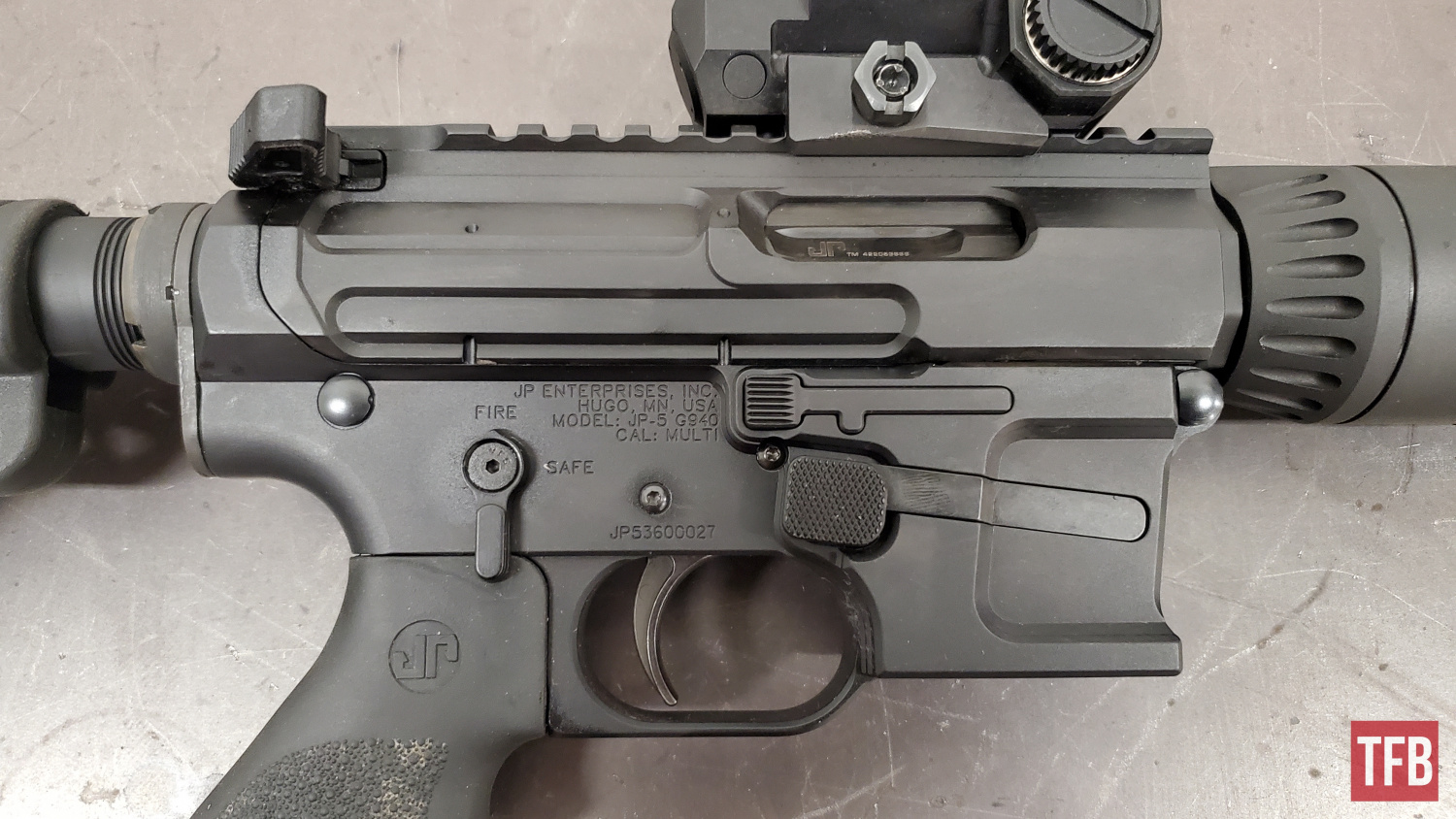 During the review process, I put roughly 1200 rounds of ammunition through the firearm during which it had 0 malfunctions despite deliberate lack of cleaning during the last 800 rounds.  I tried a variety of ammunition in the JP5 including 150 rounds of steel cased TulAmmo and Wolf 115 gr which it cycled flawlessly.  Most of the rounds used during testing were Blazer 124 gr and Fiocchi 115 gr.  I also ran two 17-round mags of Speer Gold Dot through the rifle to ensure it would feed hollow points which it managed to eat reliably.  The JP5 uses standard Glock magazines and performed reliably with OEM, Kriss extended, and KCI magazines. The only issues I noticed were failure to lock back the bolt on an empty mag with the Kriss 40 round mags. 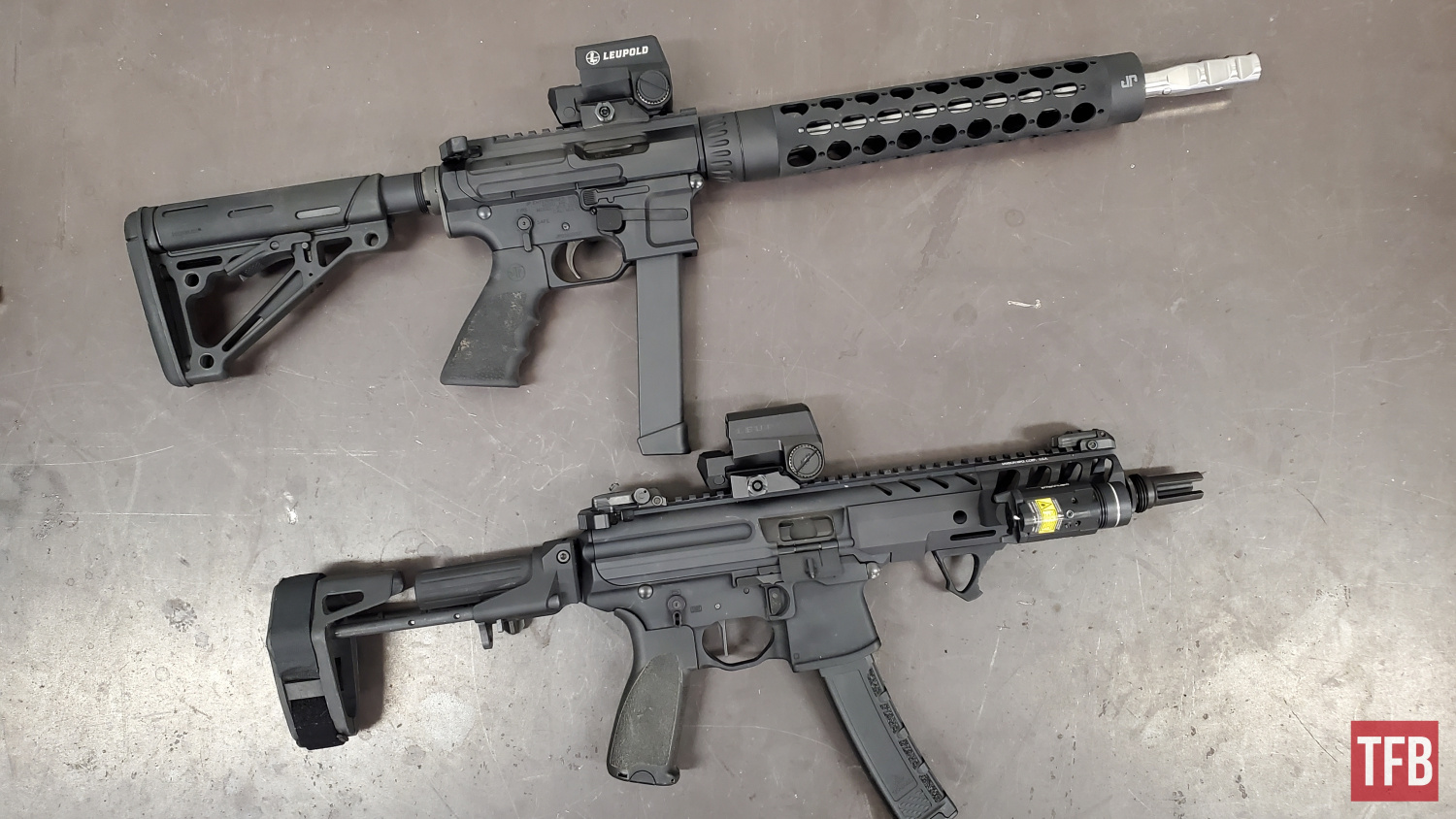 Compared to its contemporaries such as the MP5 and MPX, the JP5 is notably lighter recoiling.  The recoil impulse is much softer than the MP5 being both gentler and easier to rapid-fire accurately with.  The SIG MPX has a similar but sharper recoil impulse that makes it slightly more difficult to perform rapid double and triple taps on targets at medium distances.  Setting up a plate rack at 50 yards clearing it was noticeably easier and faster with the JP5.  I found that the impulse of the MPX tended to throw my aim off more than the JP and leave me slightly off-target whereas the JP sat in place and never really moved. 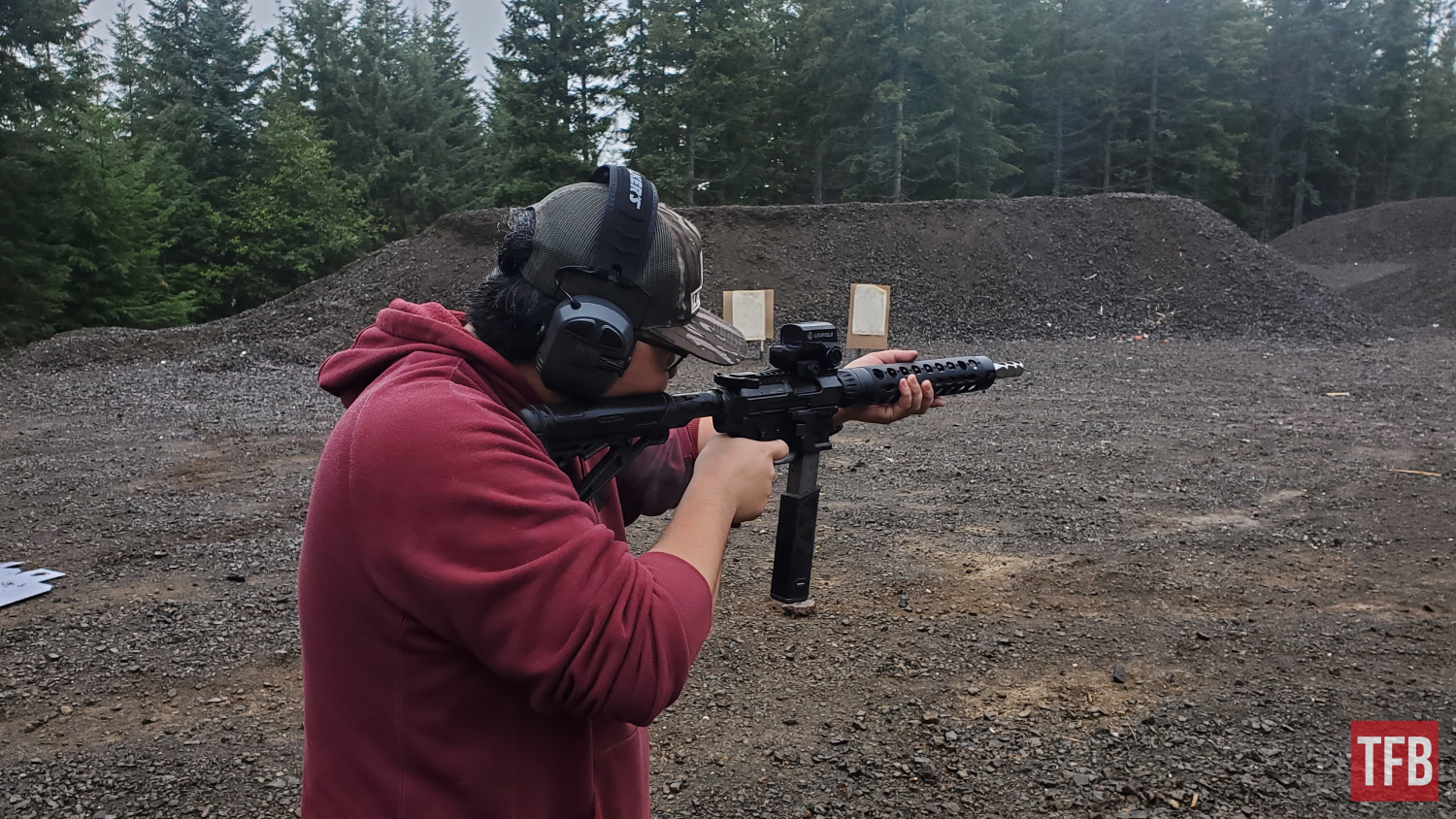 Firing the JP5 in the rain

JP will be offering three premade configurations of the JP5, an all-purpose, competition and steel challenge model starting at $3,200 USD with the model I received being $3,269 which is a hefty pill to swallow for a PCC so now the million-dollar question, is it worth it?  In my opinion, if you’re serious about PCC competition, this is one of the best firearms for the job.  My MPX after various upgrades and tuning ended up well north of $2,500 and the JP5 performs noticeably better.  A serious competitor or someone who wants peak performance in a pistol caliber carbine will be well served with the JP5 as long as they can pony up the cash.