The Meopta Optika6 series of riflescopes aims to push the limits of you and your rifle at distance.  The Optika6 lineup features eight different reticles in both first and second focal planes. As long-range rifle season is in full swing, I requested the Optika6 4.5-27×50 SFP to test out on my Ruger Precision Rifle in .300 PRC.

What’s in the Box?

Meopta Optika6 – What’s in the box?

From the factory, the Meopta Optika6 ships with a pretty standard set of bikini-style scope covers.  The box advertises a lifetime warranty, and that the optic is waterproof when fully submerged. 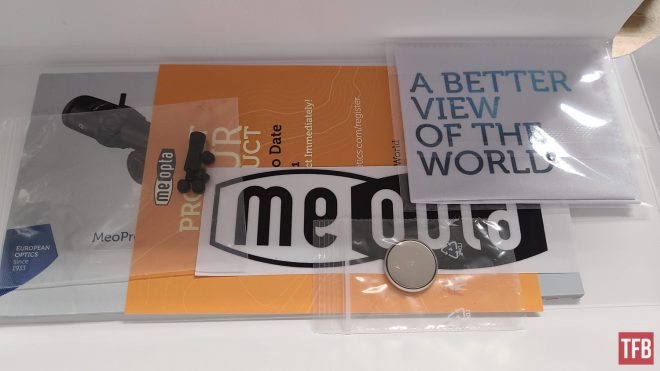 Additionally, the optic includes a power throw lever, inserts, cleaning cloth, instructions, and a battery (that wasn’t needed for this model). 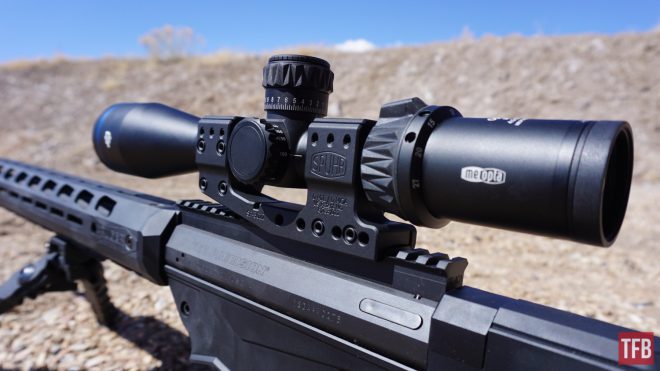 As I’ve had great luck with the SPUHR SP-4022 mount in past reviews, I decided to use the smaller SPUHR SP-3022 for this review. This would give me the same sight scope height I was used to on this rifle while accommodating the slightly smaller 30mm tube. 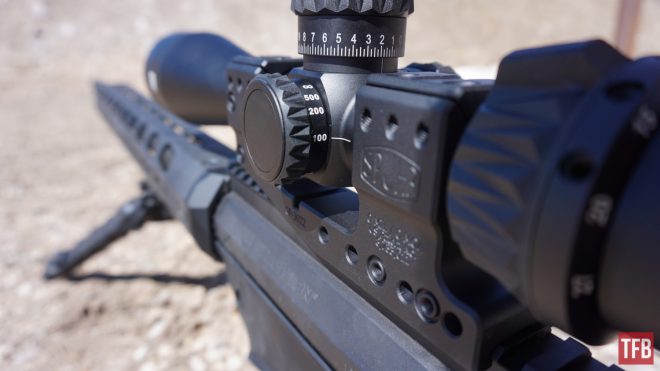 The scope has a standard left-hand side parallax knob.  This adjusts specifically for distances as close as 25 yards, all the way out to 500 yards.  Anything past 500 yards and you’ll need to use the marked infinity setting. 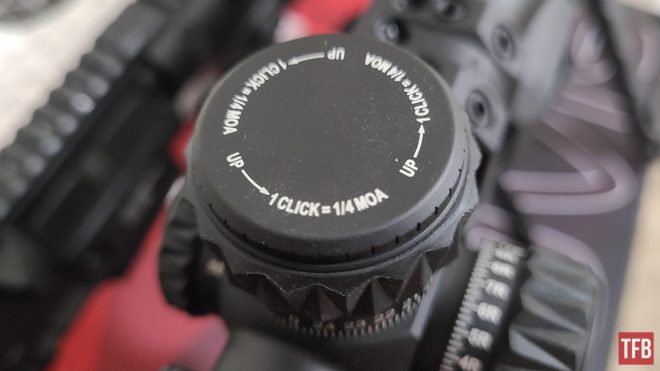 Unlike most optics, the Optika6 has a slightly different elevation adjustment.  In order to adjust for elevation, you first need to lift up on the elevation knob and then turn the turret.  The cap sitting on top of the turret unscrews by hand and allows you to set your zero without any tools. 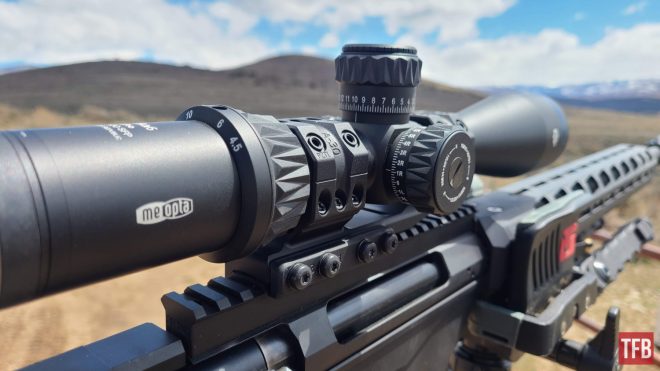 The windage adjustment does need a standard coin (or large flathead screwdriver) in order to remove the cap and set zero.  Both the windage and elevation adjustments have a nice weight and tactile click when making adjustments. 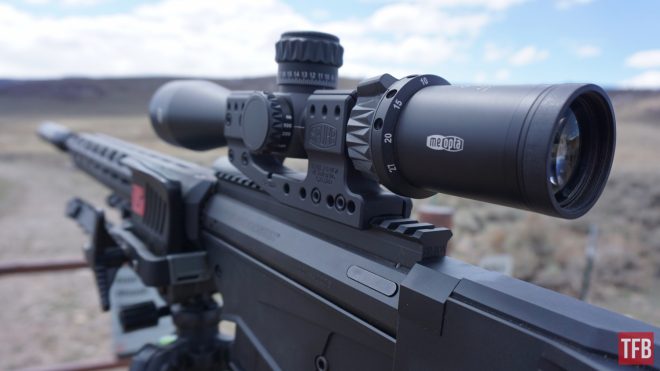 On the magnification or power ring, there are four different mounting positions for the included power throw lever.  I found the ring to be just light enough (with the pronounced texturing) that I opted to leave the power throw lever in the box. 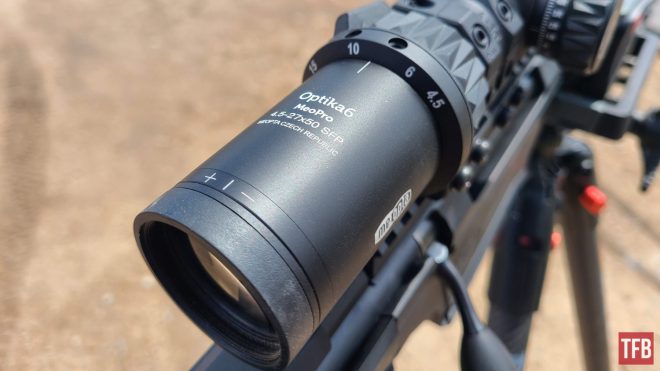 The rear ocular lens of the Optika6 includes a standard European-style focus ring for quick adjustment. 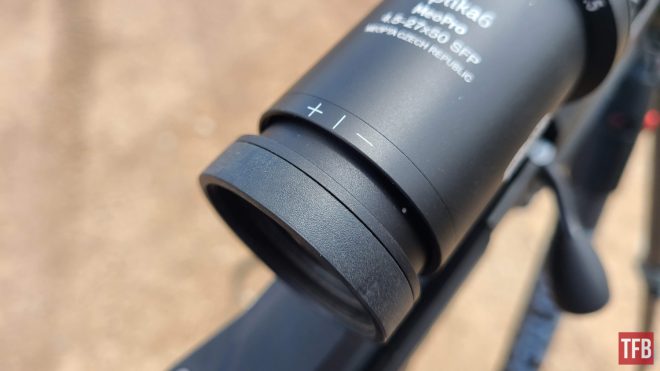 Located on the focus ring assembly is a small white dot.  This dot acts as a reference point and is helpful to note when there are multiple shooters adjusting the scope to their own eye. 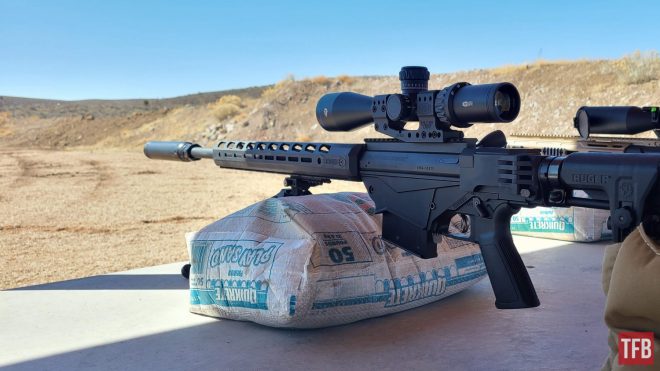 I’ve used this 300 PRC Ruger Precision Rifle in various TFB optic reviews.  Its 0.6 MOA average with factory ammo makes it a great tool for testing how well a scope tracks. 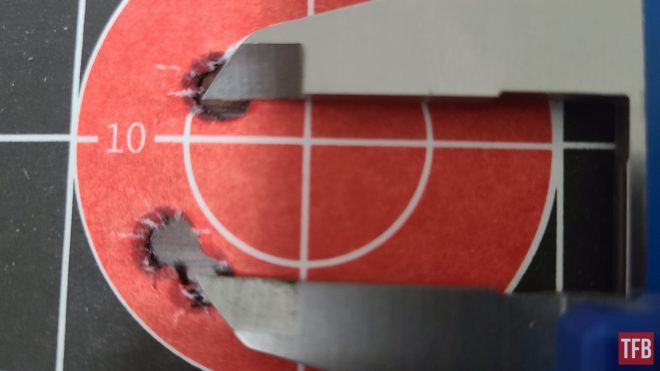 After getting the rifle on paper I adjusted and printed this initial three-round group. I’d make that small correction to the center of the target after I was finished testing the tracking. 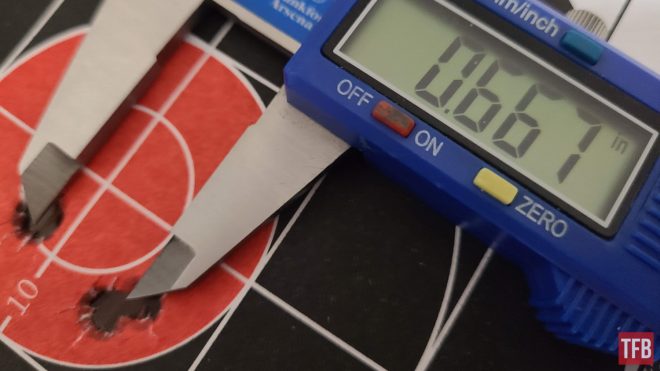 Before adjusting to check the tracking I verified the group size to confirm the rifle is, and was, shooting how I’d expect it to. 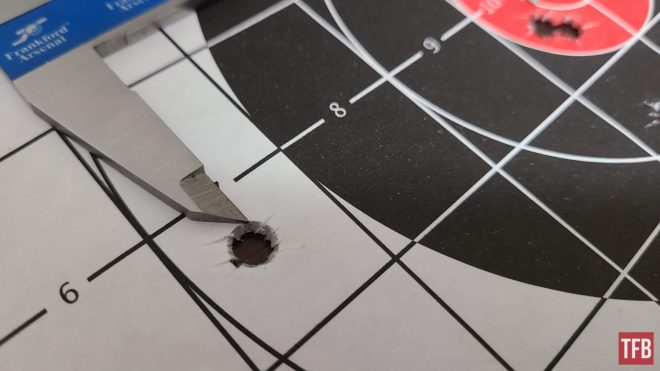 Holding center again I put +3 left into the optic, with the shot landing dead on. 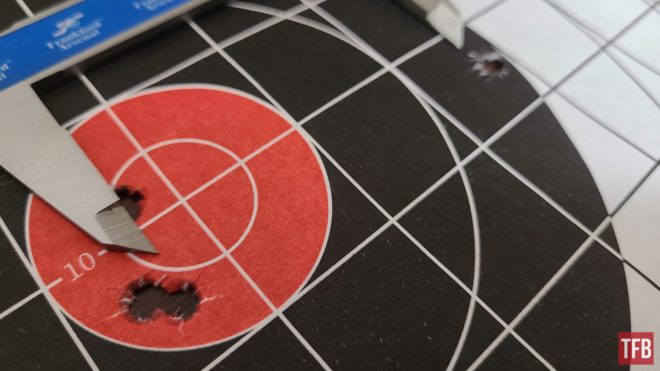 I followed by +3 MOA right of center into the optic.  Both of these shots landed almost exactly 3in from the center of the group and well within the margin of error. 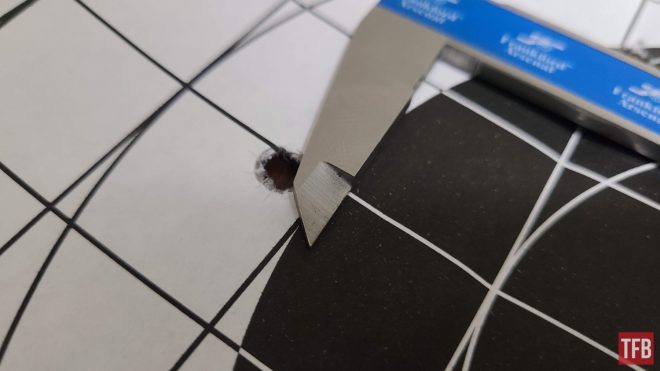 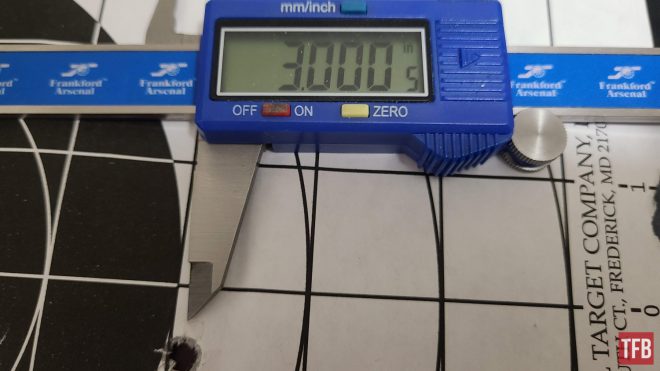 Confident the scope was tracking and now zeroed I was off to one of my favorite shooting spots to see how it looked and performed at distance. 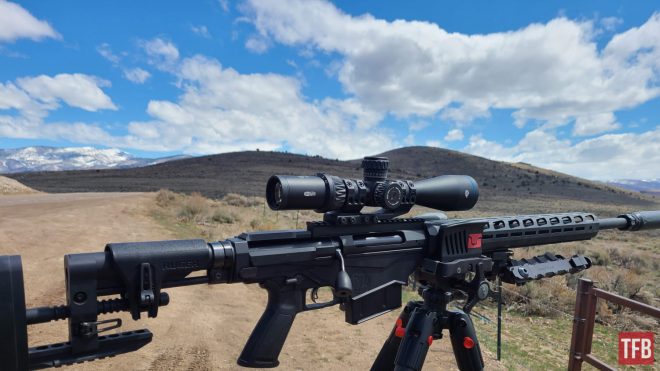 Meopta Optika6 at the range

The final test for the optic took place at one of my favorite local shooting spots.  With steel out to 750yards and always shifting lighting conditions, it’s the perfect little proving ground for optics.  I recorded some of my shots and adjustments throughout the day to give a little better perspective of how the optic performed.

All the previous data I had on the rifle was spot on, and the scope tracked perfectly.  As you can see in the video, the process of re-acquiring targets while keeping the reticle in focus became somewhat tiresome. 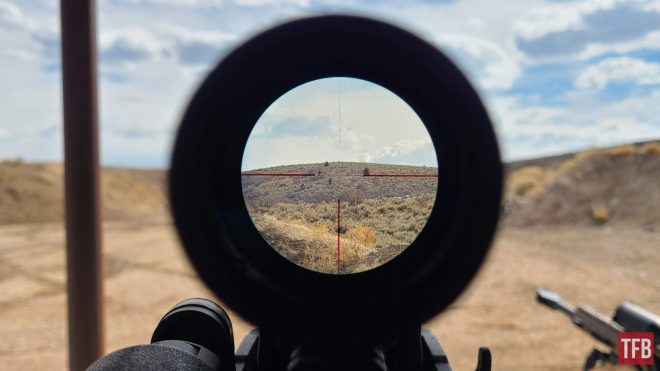 I repeated the process as best I could in these photos to show just what I was experiencing.  At lower magnification, the amber crosshairs are very crisp with no distortion visible.  The big 50mm objective lens does capture a lot of light and looks great at lower magnification. 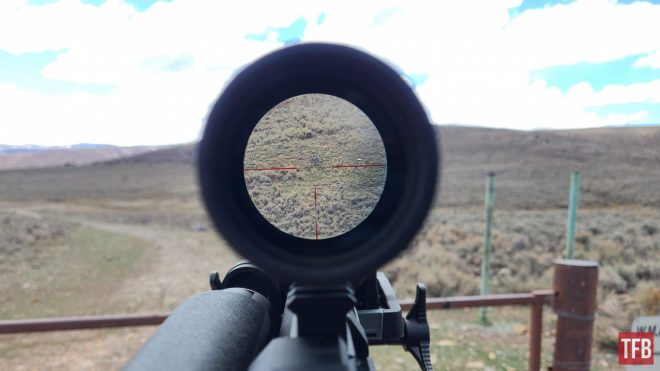 With the magnification increased, both the image and the reticle tend to go in and out of focus quickly.  Even with its long eye relief almost any movement of my eye would immediately cause distortion of the reticle and cause heavy vignetting (edge shadowing).

The Optika6 features very tactile turrets, an excellent finish, and includes features like a factory power throw lever.  I thoroughly enjoyed the amber 4D Dichro reticle on this model.  This semi-opaque duplex allows for very precise adjustments without obscuring your target downrange. 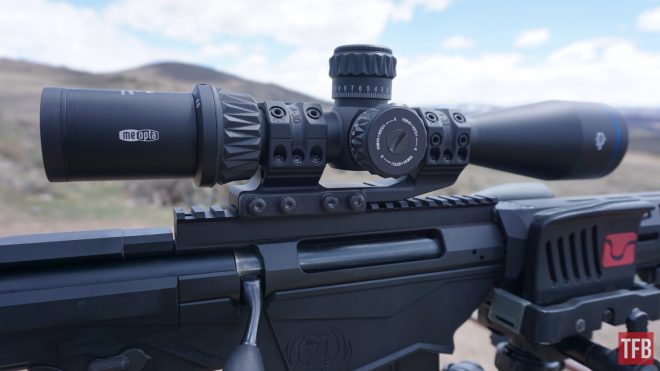 Clarity, when magnified, was the biggest con for this optic.  If I came off the rifle between shots, I spent more time trying to find the center of the exit pupil than I did actually shooting.  Additionally, the elevation turret pop-up to adjust the system seems a bit unnecessary but was something I got used to quickly. 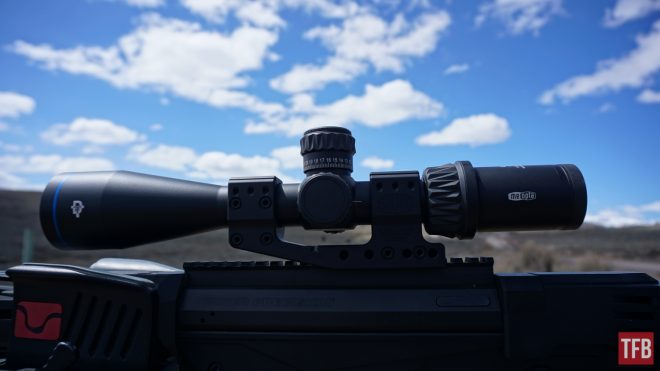 With an MSRP of $749.99, the Meopta Optika6 priced affordably alongside scopes of similar magnification in what I would consider the entry-level market.  The different reticle options (including BDC reticles) in the lineup are a welcome addition to the US market.  My eye certainly didn’t quite agree with the exit pupil on this optic, but I was impressed with the overall construction of this scope and how well it tracked.

Thank you to Meopta for sending over the optic for this review.  For more information and the full list of Meopta Optika6 product features head on over to the Meopta Sports Optics website.

We are committed to finding, researching, and recommending the best products. We earn commissions from purchases you make using the retail links in our product reviews. Learn more about how this works. Source: https://www.thefirearmblog.com/blog/2021/05/03/tfb-review-meopta-optika6-4-5-27×50/?utm_source=rss&utm_medium=rss&utm_campaign=rss