Hello and welcome back to another edition of The Rimfire Report! This ongoing series is all about the rimfire firearm world. If you had asked me two years ago if I thought reloading would be almost dead I would have told you no. However, as most of you who do reload have seen we’ve reached somewhat of a bottleneck in regards to one simple core component to the reloading process – primers. Primers have reached an astronomical level of price inflation and it doesn’t seem like the big four can do anything to bring affordable primers back to the consumer market. That is why back near the end of 2020 I was elated to see that Cutting Edge Bullets was offering a pre-order of a .22LR reloading kit which included primed brass. So what’s it like reloading .22LR with one of these kits? Let’s find out.

Cutting Edge Bullets leaned pretty heavily on their marketing campaign for this new .22LR reloading setup. Their first wave of advertisements included the original 32-grain monolithic CuRx bullets which were marketed as a cure for your “projectile dysfunction.” One of the last YouTube videos I watched in 2020 was Cutting Edge Bullets’ humorous advertisement for the 22LR reloading kits.

Needless to say, I was sold and I pre-ordered a .22LR reloading kit. However, due to supply chain issues surrounding the spun brass casings, it took several months for my kit to arrive but I think it was well worth the wait. In total, it cost me just $202 for 200 pieces of spun brass, 200 32-grain monolithic lathe-turned bullets, and both of the dies and shell holders needed for reloading. Resupply of the bullets and spun brass is just $80 including shipping so you’re still looking at about 40 cents per round plus however much you value your time at. For me, this was more about the experience rather than any sort of cost savings and since I had just recently gotten into precision rimfire, I wanted to start seeing if there was a significant difference between ammunition types. 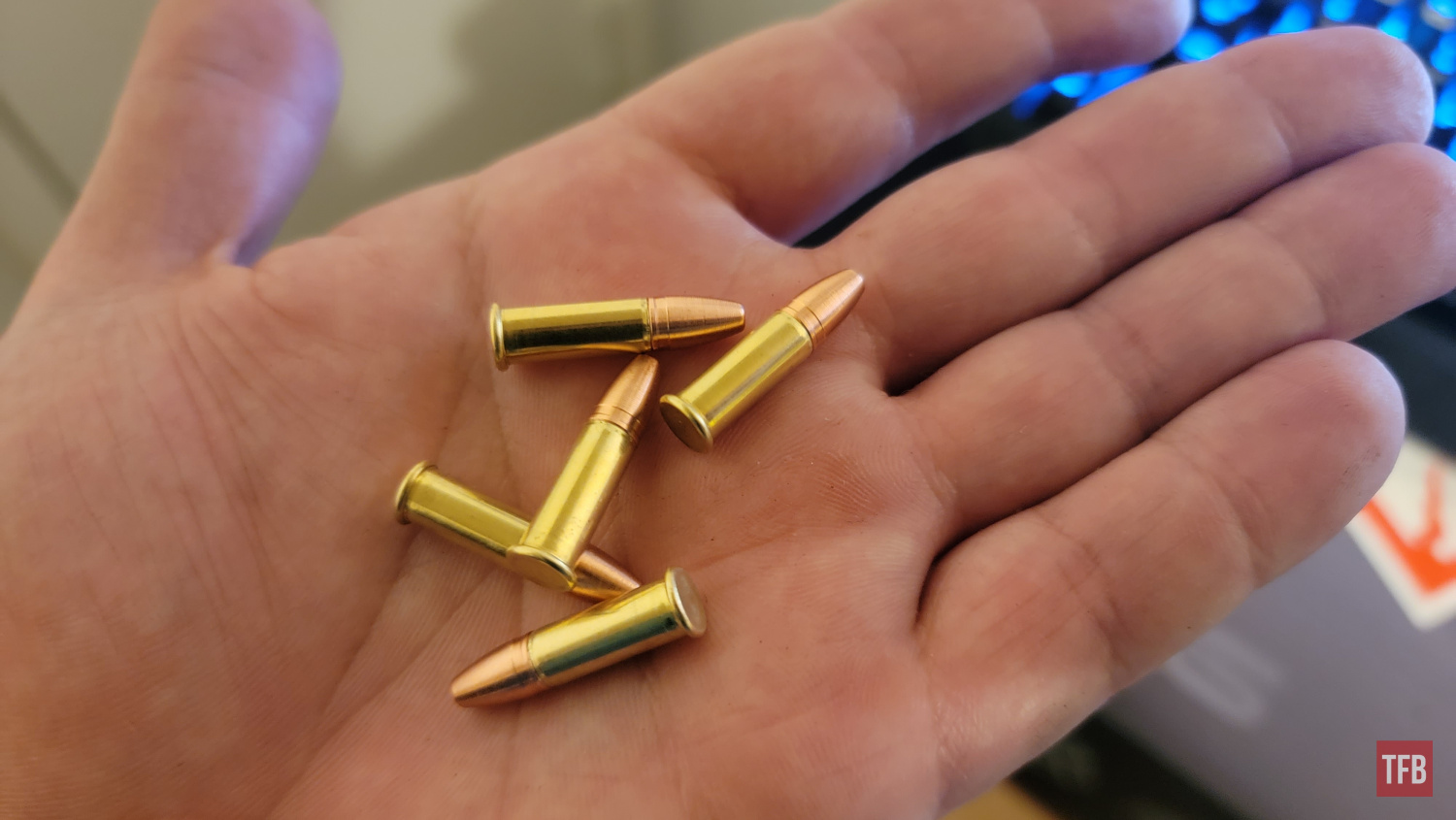 What’s in the Kit?

When my package finally arrived, I was pleased to see that Cutting Edge Bullets kept the initial design for the die, shell, and bullet containers – all of them looked professional and even included humorous yet informative “prescription labels” on each of the containers. Unfortunately, a few of my containers seemed to be damaged in transit and there were cracks but none of the dies, brass, or bullets were damaged thankfully. 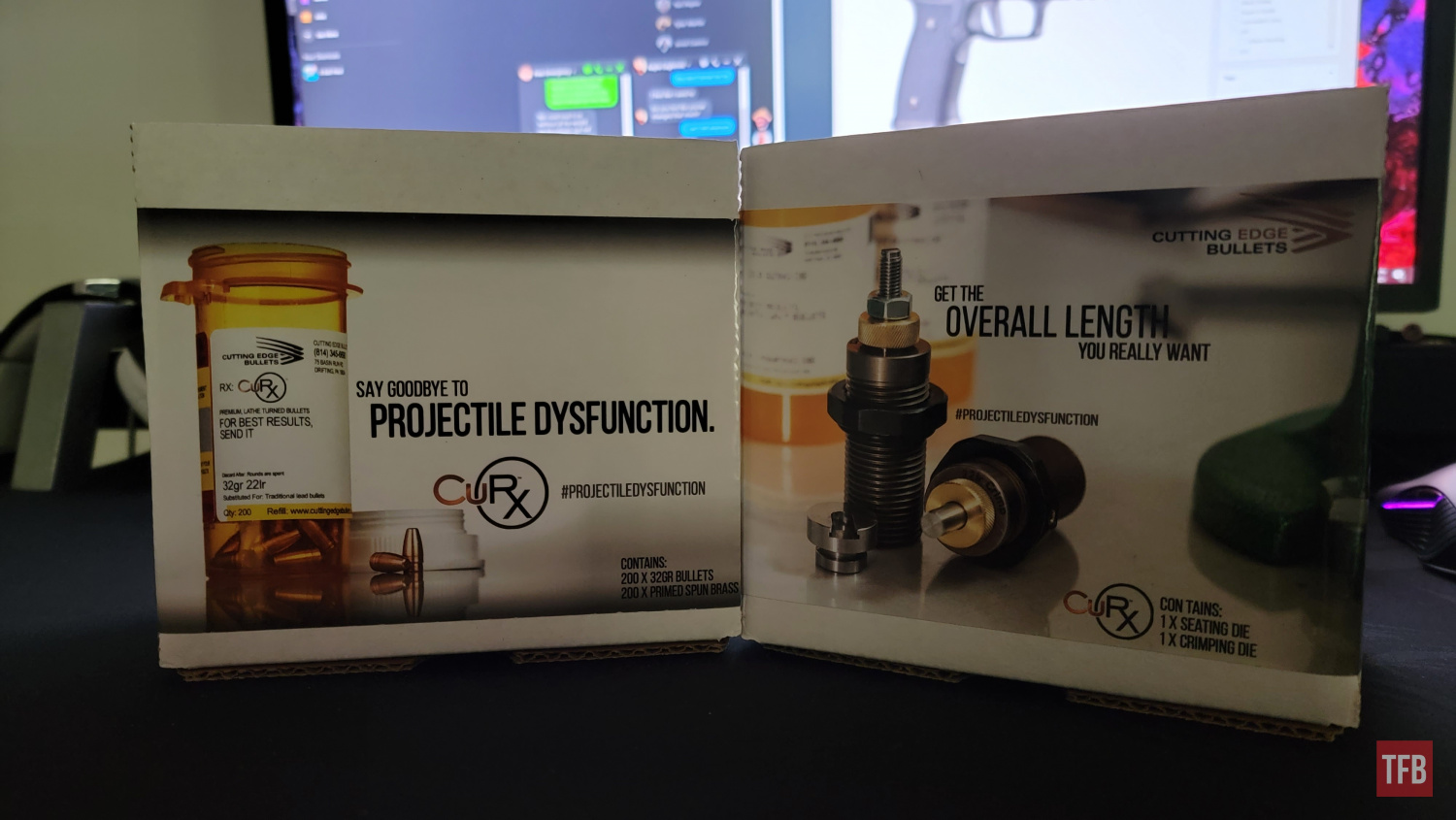 The die set comes with two shell holders, one bullet seating die and one factory crimp die. The shell holders and dies should be compatible with most standard 7/8×14 threaded press setups. When I first installed my shell holder into my Lee Challenger single-stage press, I had to use a lot of force to get it in and out of there. The tight fit is probably to ensure a snug fit on all reloading presses and in my case, it just took a bit more effort to get the shell holder in the correct place.

The last two containers featured the spun (primed) brass and the 200 32-grain solid copper projectiles. While I do really appreciate the gimmick of having your projectiles and brass delivered in a themed set of containers, I would rather have future resupplies of the brass and bullets delivered in standard cardboard packaging. Each of the bullets I weighed was exactly 32 grains with no deviation and this should be expected from a lathe-turned projectile.

When I first ordered my reloading kit, Cutting Edge Bullets included documentation regarding the type of powder and charge that should be used when starting out. The instructions called for the use of Vihtavuori 3N37 powder (starting at 2.1 grains) as well as a light crimp with the factory crimp die. In addition, Cutting Edge also recommended the use of a powder scale with a minimum resolution of .01 grains and ideally a .005 resolution minimum. I did not have a powder scale with that fine of a resolution so I had to settle with what equates to their “minimum operating equipment.” 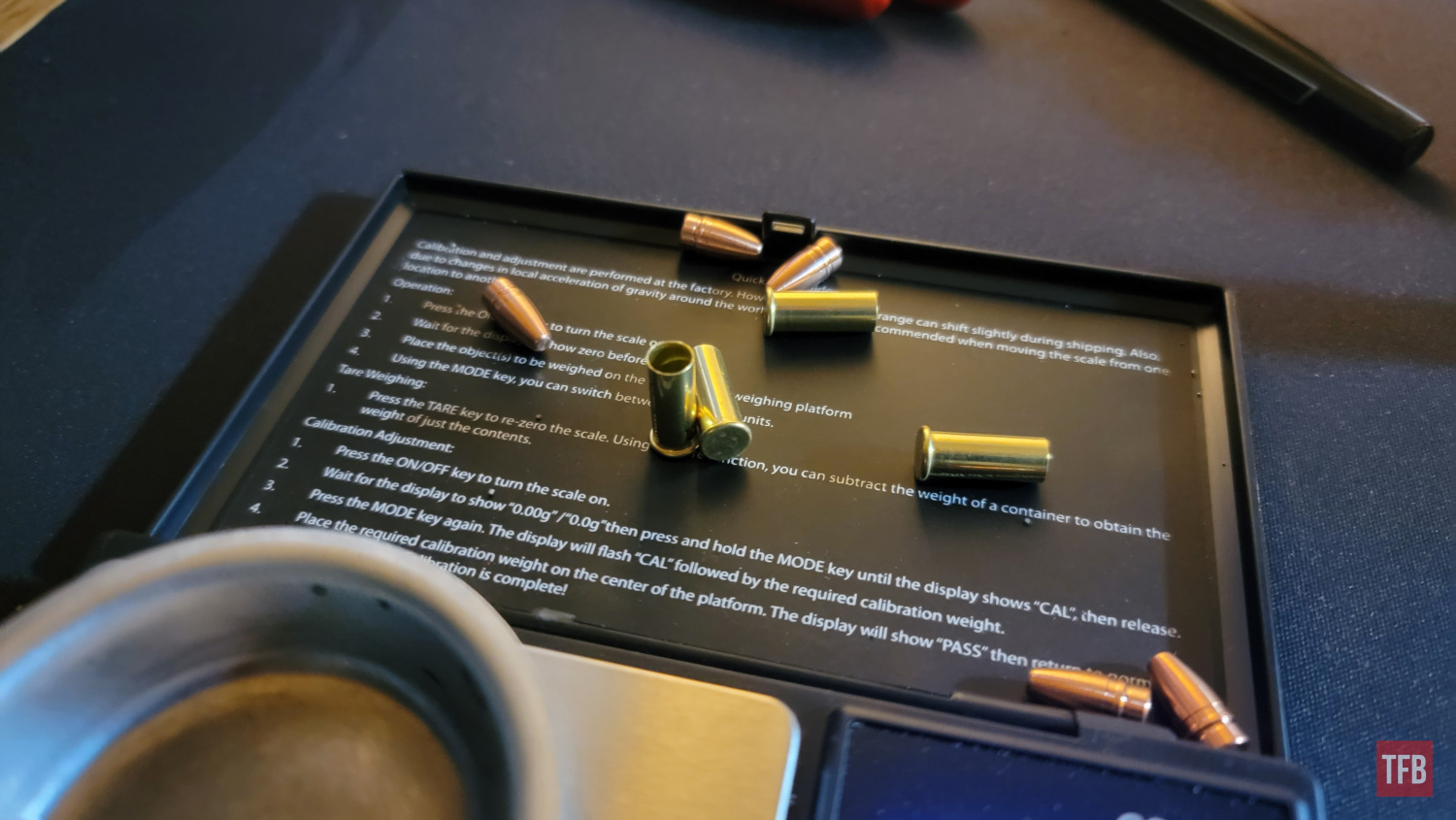 I attempted to use my RCBS Uniflow powder measure but I could not get it to consistently throw a 2.1-grain charge. This is due to the nature of the powder and how it meters as well as the limitation of the powder dispenser itself. Instead, I chose to hand measure each load using a small dipper and applying it to my powder scale. While this was time-consuming, it proved to be the only accurate way to throw charges without spending hundreds on an electronic powder trickle with a fine resolution.

My recommendation would be to invest in a decent scale with the recommended resolution and an inexpensive hand powder trickler. Additionally, I would also invest in a small aluminum powder funnel for dropping the charge into the case. With how small the cases are, it’s easy to get clumsy and knock one over or drop a few precious granules of powder which could throw the load off. Needless to say, this is one of the more challenging reloading setups I’ve had to work with because of how small in scale everything is.

Seating the bullets is accomplished in the same way every bullet seating is done. However, due to the unique way .22LR works, the bullets already have their minimum length built into them. Cutting Edge Bullets recommends seating the bullets to an overall cartridge length of between .990 and .995. When my bullets were fully seated I was getting consistent measurements at around the maximum .995 OAL.

As with most straight-walled cases, reloading .22LR is astonishingly easy and doesn’t require a lot of force to get the bullet seating. The cases are not flared from the factory and they don’t really need to be as the bullets have a slight bevel at the base for proper alignment. After using the seating die for a bit I learned that I could easily push the projectiles into their maximum depth by hand and they still came out with the correct overall length. So depending on your arm strength the seating die may or may not be superfluous in my opinion or perhaps I am missing something and doing this completely wrong. 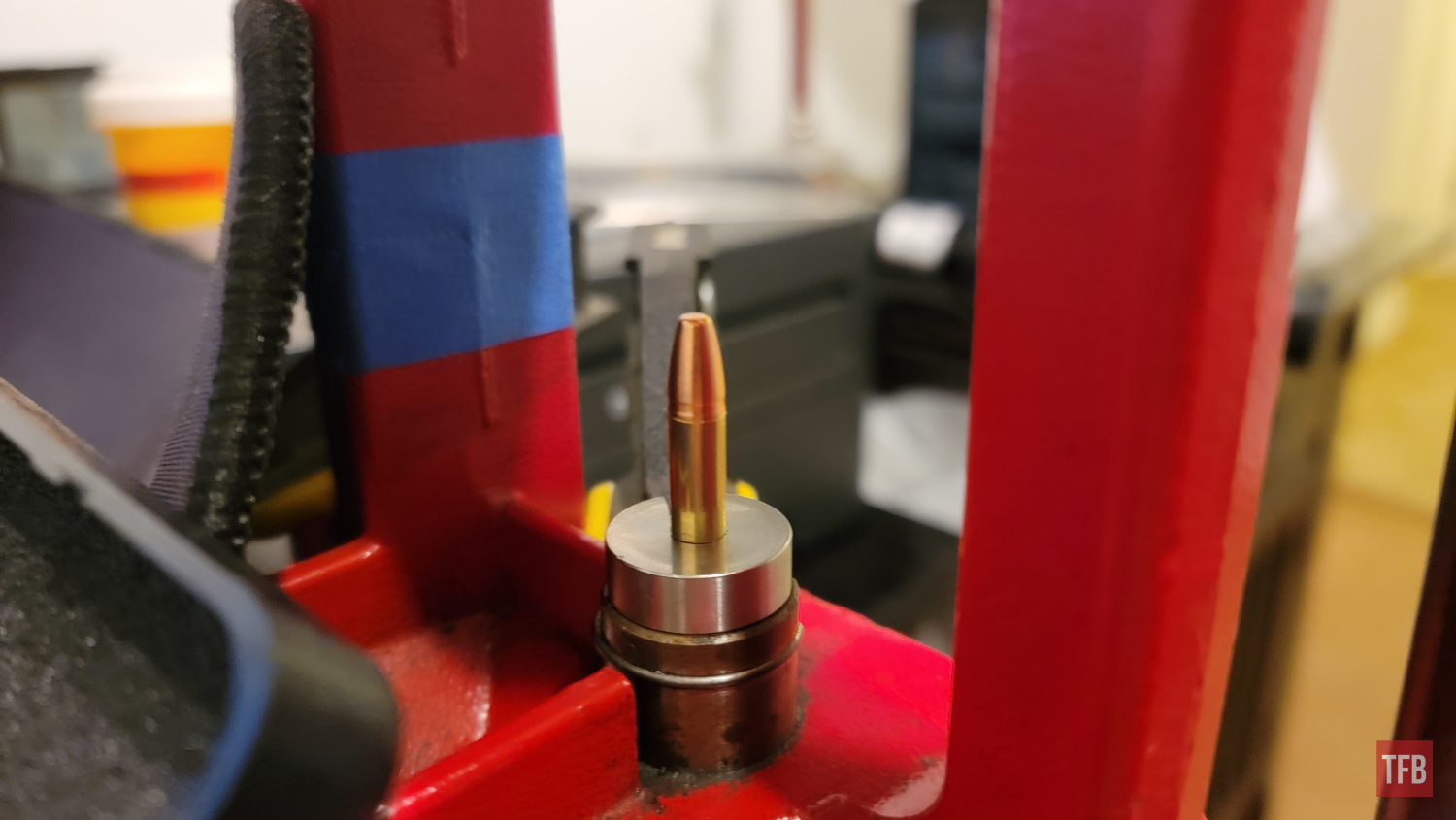 Transfering the loaded cartridges over to the crimping die is what requires the most amount of adjustment. To start off with a light crimp it’s best to back off the crimping die as much as possible then raise the loaded cartridge up as far as possible and then finally, slowly bring the crimping die down until it just makes contact with the case. Once that is done it doesn’t take but an eighth of a turn to get a light to crimp in. Since I’m not offering my personal loading data here, I would just say that in general, it is always best to start off with a light crimp and then increase from there if you desire more velocity from the same powder charge.

Overall, I think cutting-edge bullets have finally made a solid entry into the .22LR reloading market. While it may not save you time, or money, it is definitely a great way for you to control nearly every last aspect of your extreme long range or precision .22LR setup. Many serious ELR or Precision Rimfire Shooters will actively seek out single lots of ammunition that work well in their rifle and buy nothing else, but this may turn out to be an alternative for those who want complete control over their long-range .22LR ammunition.

Over the coming weeks, I’ll be testing out some of my loads and comparing them to both standard factory ammunition and match ammunition to see how my CuRx loadings hold up to factory-loaded ammunition. Once again thanks for stopping by to read The Rimfire Report. Please feel free to leave us a comment and let us know what you think of the new Cutting Edge Bullets CuRx reloading kits!

We are committed to finding, researching, and recommending the best products. We earn commissions from purchases you make using the retail links in our product reviews. Learn more about how this works. Source: https://www.thefirearmblog.com/blog/2021/06/28/cutting-edge-bullets-22lr-kit/?utm_source=rss&utm_medium=rss&utm_campaign=rss