Hello and welcome back to another edition of The Rimfire Report! The Rimfire Report is all about the various firearms, ammunition, modifications, and history of the rimfire firearm world. This week we’ll be talking about an idea that goes as far back as 1861 with the original invention of the Gatling gun by North Carolina’s own Richard Jordan Gatling – inventor of the Gatling gun. The Gatling gun was the fevered dream of the American inventor that eventually resulted in decade after decade of improvement eventually giving us the modern electrically-driven M134 Minigun, M61 Vulcan, and GAU-8 Avenger. While owning a full-auto Gatling gun is a difficult thing to achieve for multiple reasons, hand-cranked Gatling guns are fairly easy to come by and far less expensive. Our rimfire example of this for today is the Pike Arms Gatling Gun Kit. The Pike Arms Gatling Gun Kit is a DIY modification that allows you to turn two 10/22 rifles into a hand-cranked high-volume fire rig using only commonly available household hand tools.

The Ruger 10/22 rifle is fun in its own right and there is a lot to be said during these times about conserving ammunition and making every shot count. I’m not going to argue that you should go out and buy one of these kits right now and start burning through the pallet of bulk .22LR that you have stored in your basement. However, I am a strong believer that firearms should be fun just as much as they should be practical and the Pike Arms Gatling Gun concept is one that I think gives people a lot of fun value at a relatively low price when compared to full-blown transferrable options. 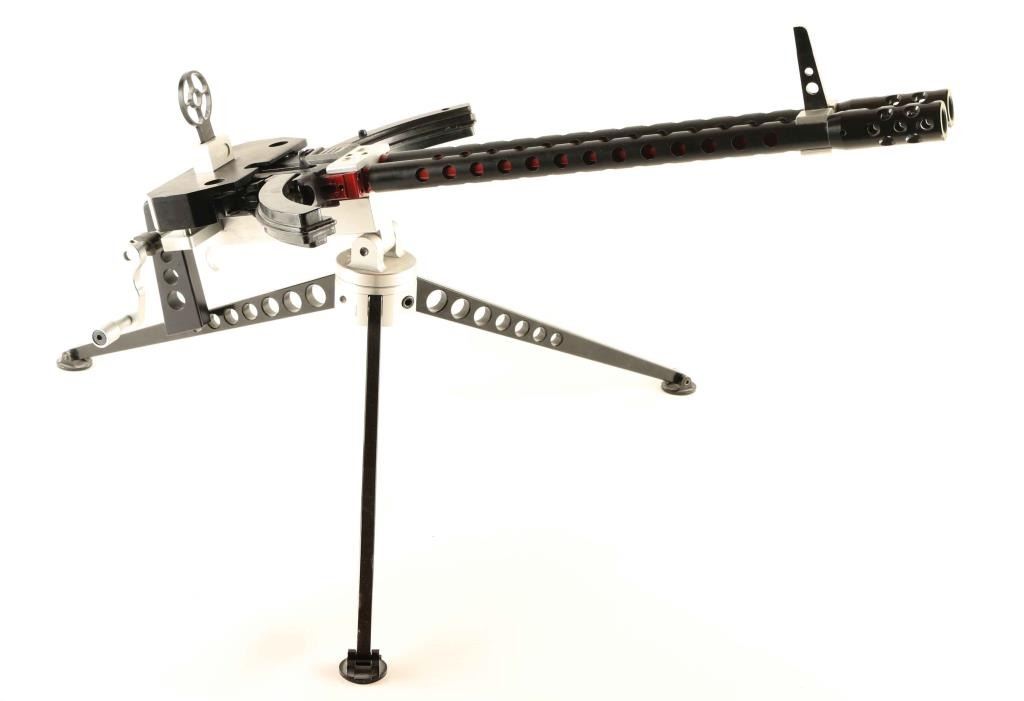 The Pike Arms Gatling Gun Kit can normally be found online for about $750 – about the cost of a budget AR. The kit itself comes with all the components you’ll need to transform two 10/22 rifles into a fun manually operated high rate of fire gun. Ruger 10/22 rifles are pretty cheap as well and base model 10/22 rifles usually go for around $300 MSRP so if you decide to build one of these out, it shouldn’t cost you more than $1,500 when you include magazines and transfer fees. 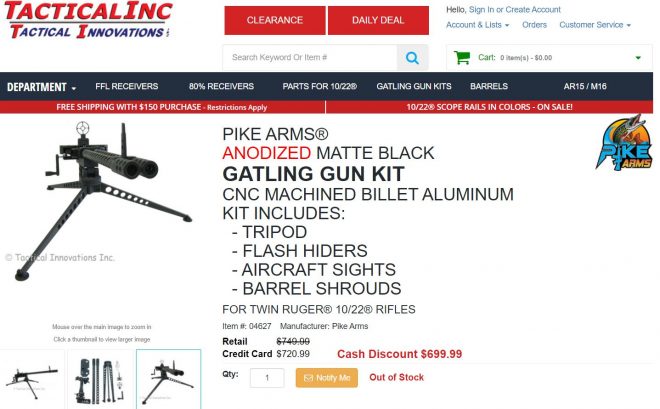 The kit itself is CNC machined from billet aluminum and has no plastic parts. The frame, bipod, barrel shrouds, and receiver covers are all made from the billet aluminum and all finished with a matte black Type 3 anodized finish. The reciever cover is topped off with an anti-aircraft style crosshair sight so you can pretend you’re defending your backyard from incoming enemy planes. A number of online retailers sell the Pike Arms Kit in a few different finishes as well. I’ve seen everything from standard matte black to silver and even gold-like coatings with bronze bushings and hardware to match. 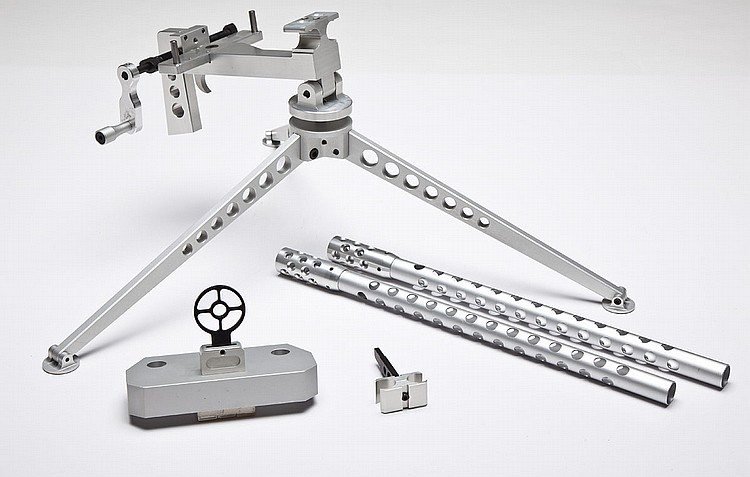 From the litany of videos I’ve seen of this setup, the operation is fairly simple. Each full 360-degree rotation of the hand crank yields 2 firings from each 10/22 rifle for a total of 4 shots per full rotation. Each individual rifle needs to be cocked before the Gatling gun will work and this is easily accomplished even with the receiver cover in place. 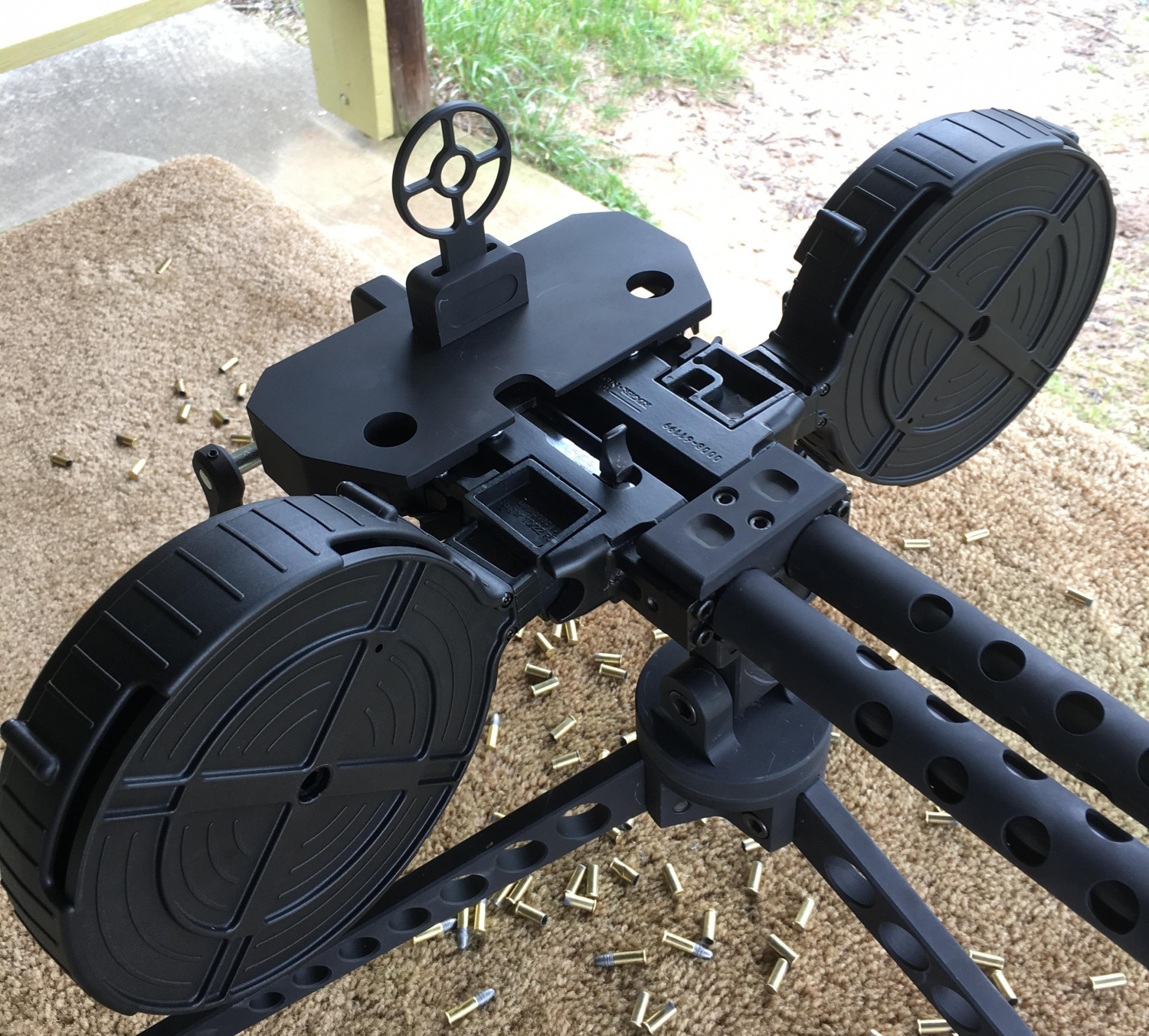 Most of the footage I have seen of these things firing hasn’t been very impressive simply because it seems like most people can’t get them to cycle properly for whatever reason. My assumption is that people use larger capacity magazines and the weight of the loaded mags is causing them to lean while attached to the rifles at a sideways angle. One great video below shows how well the system works when standard 10-round rotary magazines are used – the rate of fire is quite impressive.

Is That Even Legal?

For some of our foreign readers, it may seem like this type of thing would be considered turning your gun(s) into machine guns. However, the Pike Arms Gatling Gun kit is not an NFA item nor does it constitute turning either of the 10/22 rifles into an NFA item. “Gat cranks” are actually fairly common and while they don’t have any practical or tactical application they are quite fun to use (when ammunition is cheap). 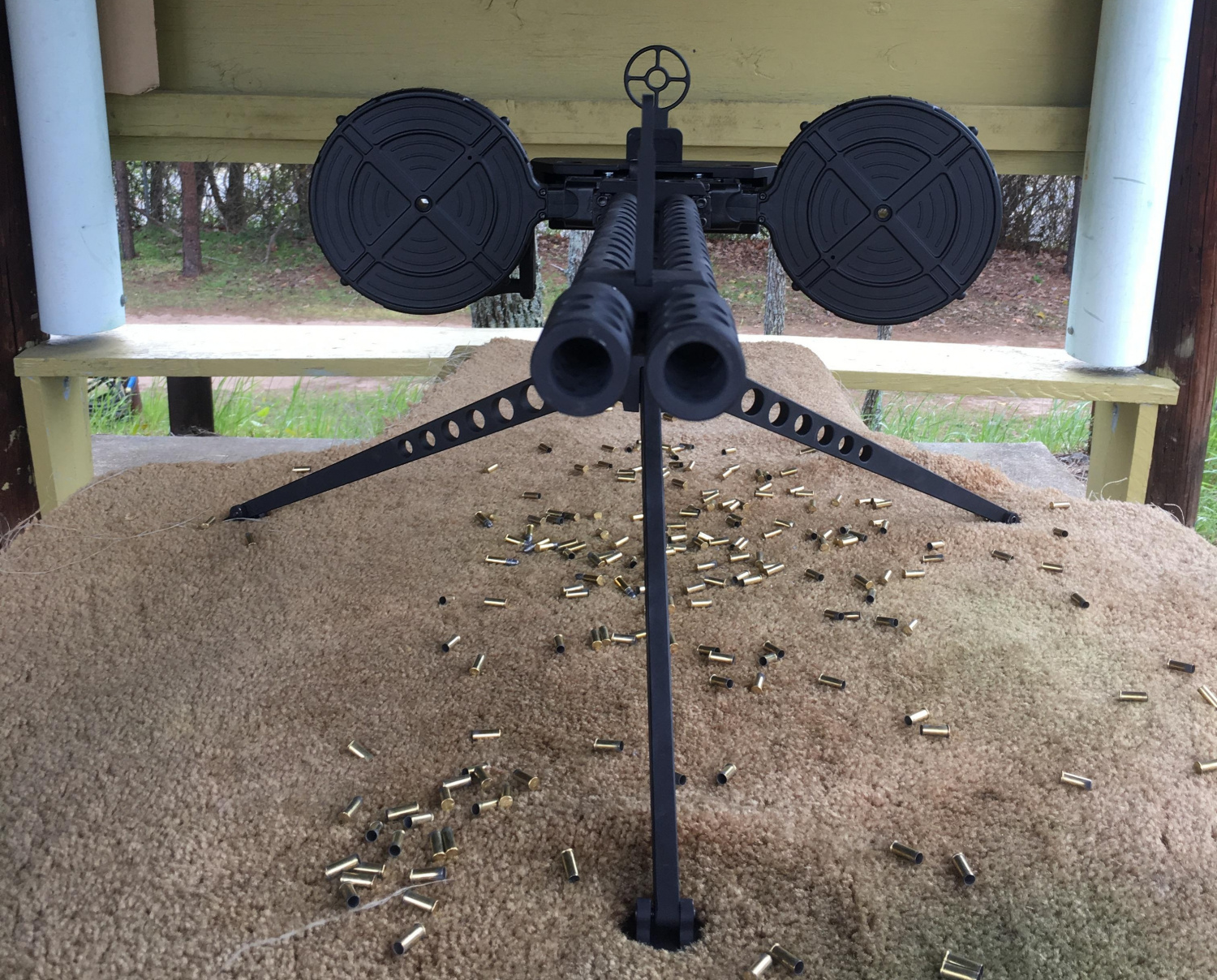 The only possible way you could feasibly turn the Pike Arms Gatling Gun setup into an NFA item would be to add an electric motor and get an absurdly high rate of fire out of it. Coincidentally this is exactly what the inventor of the Gatling gun did himself. Richard Jordan Gatling replaced the hand crank mechanism in his original Gatling Gun with an electrically driven motor in 1893 and the resulting firearm produced a rate of fire of 3,000 rounds per minute. In a much less infringed situation, you would be able to do the same legally but for now, you’d have to jump through a bunch of hoops and pay a lot of fees to replicate this. 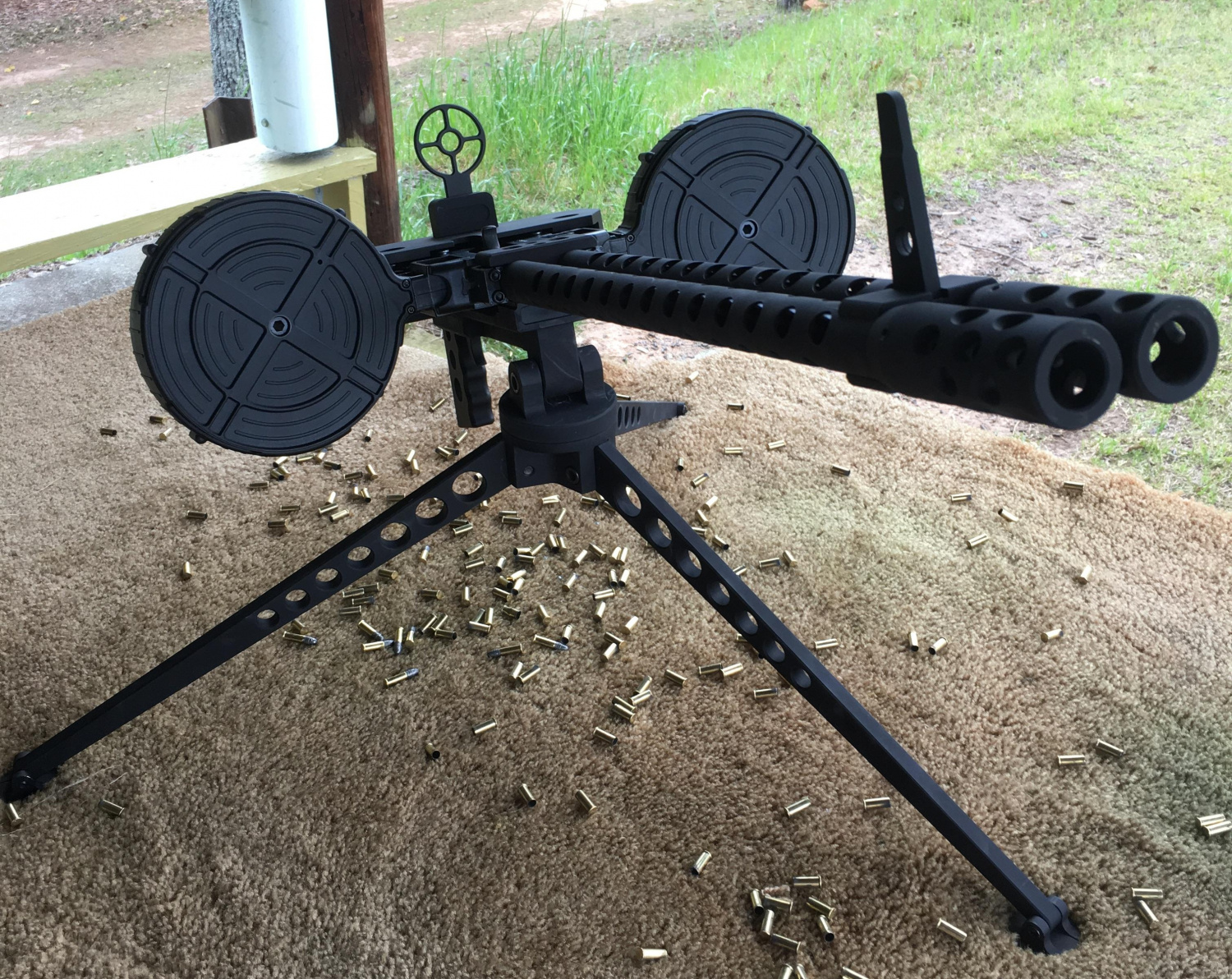 All-in-all, it seems like the Pike Arms Gatling Gun kit is just a fun, wholesome way to get a bit of fun out of some 10/22 rifles. It’s not practical, it’s not tactical, and it’s not exactly cheap during these times but that still doesn’t stop me from wanting to put one together someday. Thank again for stopping by to read The Rimfire Report! I’d be interested to hear if any of you have tried out the Pike Arms setup or something similar and what kind of reliability you were getting out of the rig. It would be really cool to see if someone was able to modify one of these kits to work more reliably with these drum mags. 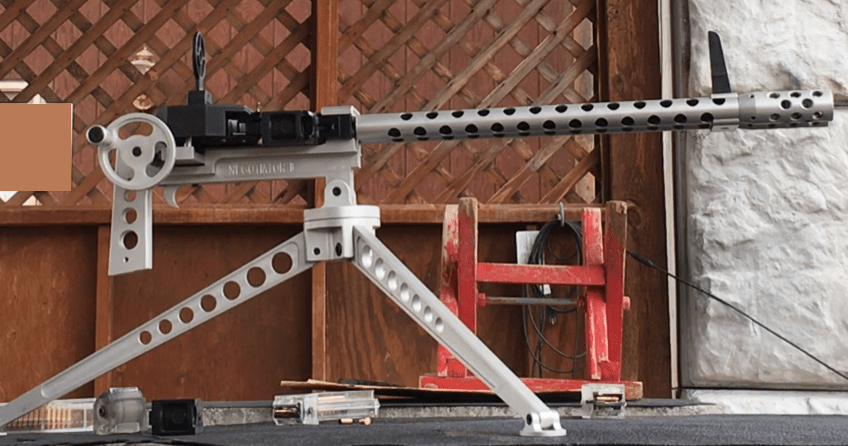