Unobtanium Guns That I Wish Weren’t So Hard to Get

If you’re a firearms enthusiast (as it’s likely that most people reading TFB are), you probably have a list of guns you want. Unless you’re one of the fortunate few to have an arsenal rivaling Heckler and Koch‘s Gray Room, the Rock Island Arsenal Museum, the NRA’s Whittington Center, or this guy that Nick met at a match several years ago, budget and availability are often limiting factors for new gun purchases. Of course, some guns are harder to get than others. Manufacturing runs and timeframes, frustrating legislation, importation challenges, the ravages of time, and a host of other factors can have a significant effect on the availability, accessibility, and price of various guns. The hardest pieces to procure are sometimes referred to as “unobtanium guns”, with the term being a sort of colloquial reference to these firearms’ difficulty (or sometimes impossibility) for us to acquire. Today we’ll explore a handful of the unobtanium weapons on my personal wish list, by no means comprehensive and in no particular order. I’m pretty sure that more than a few of you will find some commonality between my list and yours.

It will probably surprise no one to find H&K’s vaunted modern PDW on this list. The MP7 often gets mentioned in conversations like this one, and for good reason. Plenty of its global military and law enforcement users, which include such auspicious groups as the US Navy’s elite DEVGRU (aka Seal Team 6), Germany’s GSG9 and SEK, Russian Spetsnaz, and the Vatican Swiss Guard, have lauded its features and performance. While it does also have some naysayers, particularly regarding the 4.6mm chambering versus competing rounds like the 5.7, the MP7 has gained a significant fanbase over its two-decade history. Part of the furor over this low-recoil short-stroke gas piston gun certainly has to do with its rarity. Unfortunately, even though H&K does make a semi-auto version, the MP7-SF (in service with the UK’s Ministry of Defense Police), it’s still under the series’ government agency-only purchase restriction. There is a small number out in the wild with specialty rental/experience companies like Battlefield Vegas, but sadly, for the individual end-user, the MP7 would be extremely difficult and expensive to buy. If you do have the opportunity to shoot one, enjoy it! Not many people get that chance. H&K often gets asked to start civilian sales like they have with their SP5 line, but at this time, there seem to be no plans to this effect. 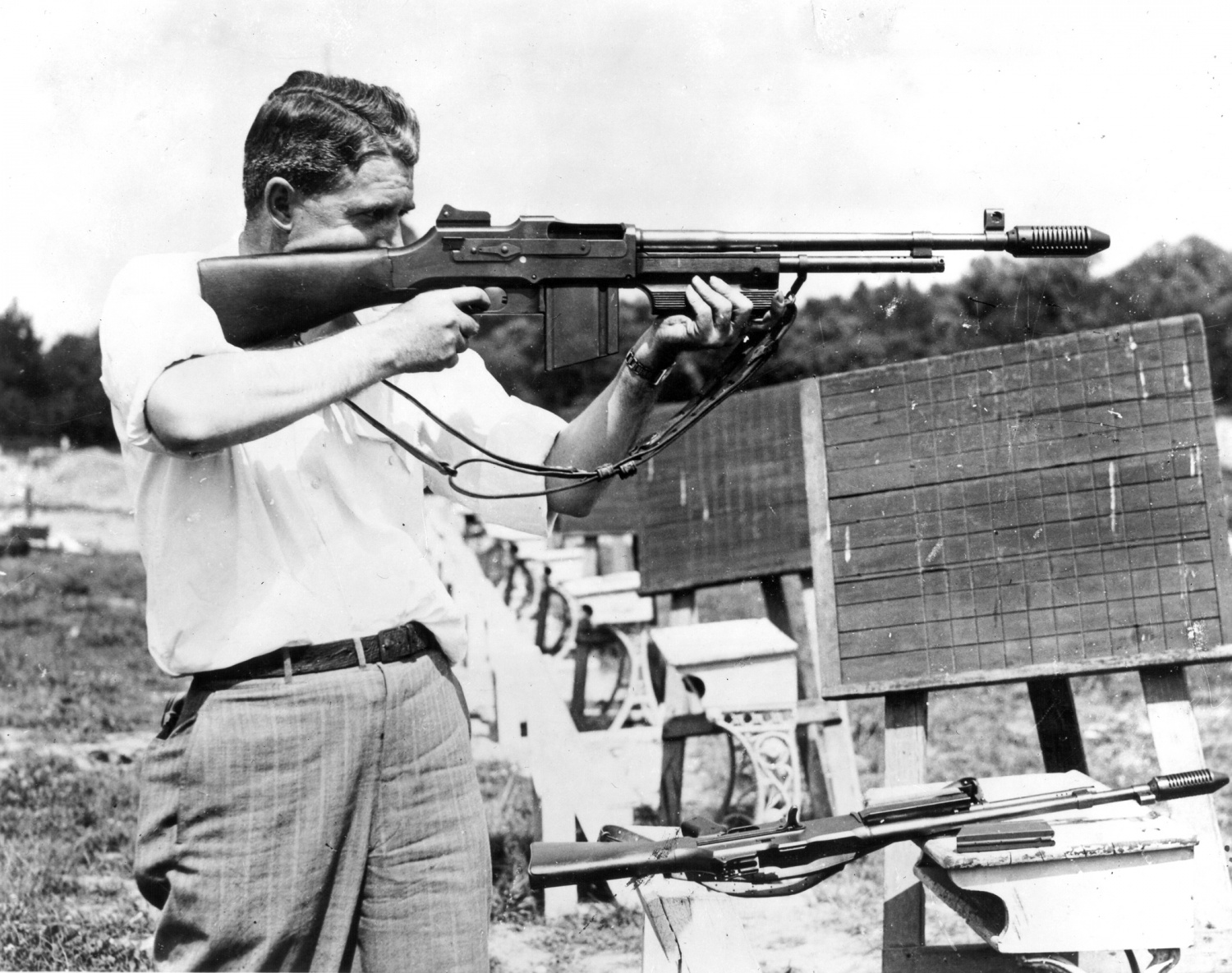 An FBI Agent trains with a Colt Monitor in 1936. Photo by the Federal Bureau of Investigation.

Any passable student of US military weapons will easily recognize the BAR, or Browning Automatic Rifle. This famous machine gun saw the bulk of its use in the WWII and Korean War eras and is generally regarded as historically important in its role. However, the BAR has a lesser-known cousin from before these conflicts: the Colt Monitor Machine Rifle. Browning first introduced the BAR at the tail end of WWI in 1918, and after the cessation of hostilities, Colt received patents to produce a variant for commercial sale. However, likely due to the Great Depression and the relatively high price of $300 in 1931 (equivalent to about $5000 today), Colt recorded no sales to civilians. With the passage of the National Firearms Act restrictions just three short years later, the Monitor seemed doomed to relative obscurity. The Monitor was shorter and lighter than other BARs, and distinctive in its inclusion of a pistol grip and a four-inch “Cutts” compensator muzzle device. The rifle gained a degree of legendary notoriety in the hands of renowned Texas Ranger Frank Hamer, as he employed a Monitor with serial number C-103168 in the fabled 1934 gunfight that brought down infamous outlaw couple Bonnie Parker and Clyde Barrow. Only an estimated 125 models of Colt’s BAR variant were ever produced, 90 of which were purchased by the FBI. Given the exceedingly small production run and relevant history, it’s not hard to see why this .30-06 beast qualifies as “unobtanium”. One of the few extant Monitors sold at auction in 2017 for $71,875, and another went in 2018 for $115,000. If price were no object, I would love to own this rare piece of history. 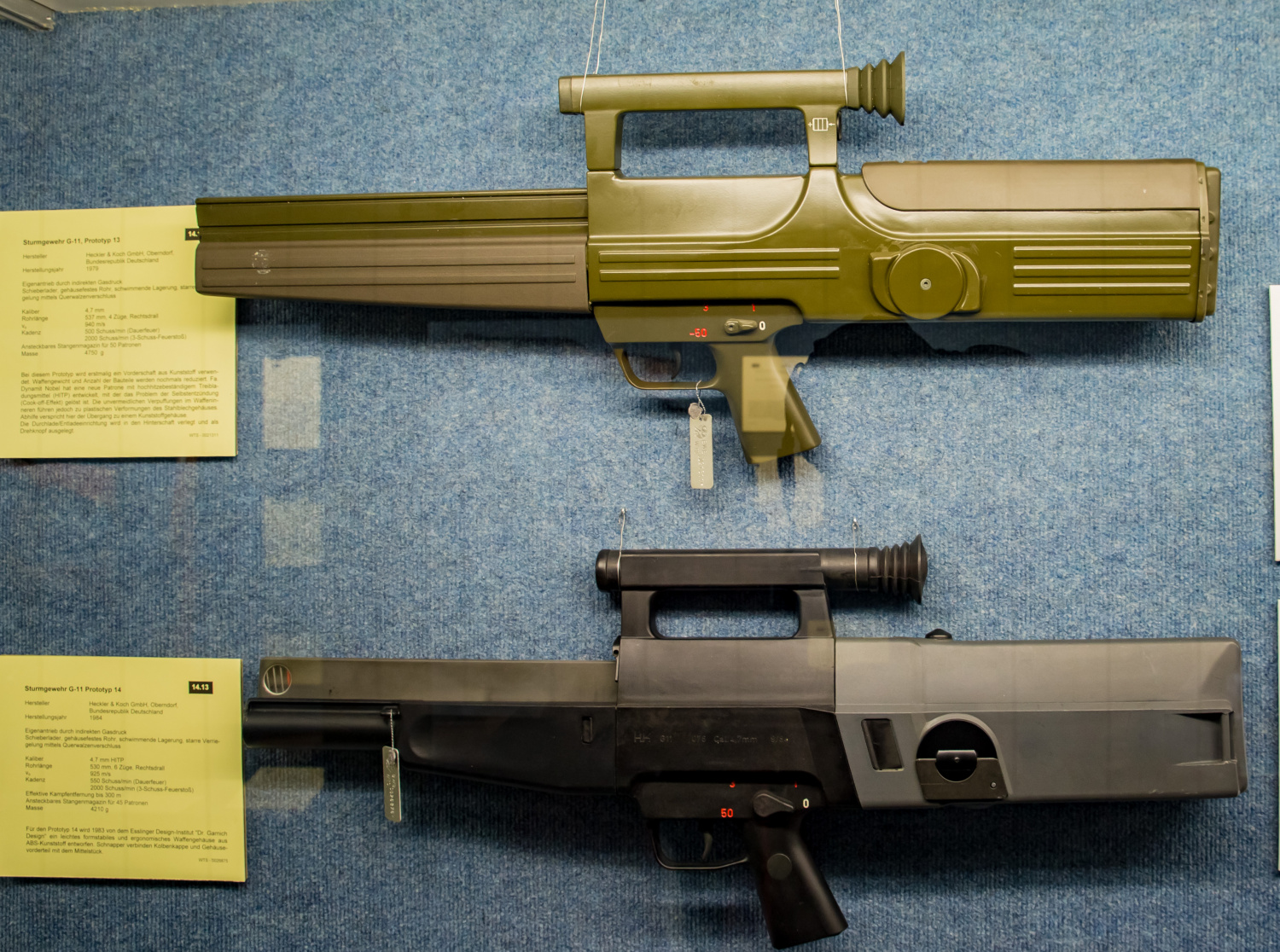 Another H&K in an unusual chambering – you’re probably not surprised. The G11 looks like a science fiction laser blaster on the outside, runs with the complexity of a fine Swiss chronometer on the inside, and fires 4.73×33mm caseless ammo with strange cuboid-shaped blocks of propellant. Sound weird enough? Yeah, it is. These same features that made the G11 so utterly unique also contributed to the reasons why it never took off for H&K like they hoped. Although the rounds weighed half as much and occupied about 40% less space than the 4.7mm’s main competitor, the now-ubiquitous 5.56, their lack of a brass container and the G11’s heat-prone design made early prototypes vulnerable to catastrophic failures with ammo cook-off. Although some improvements were made over the course of the G11’s twenty-plus year development history, and caseless ammo attempts have continued after the rifle program’s termination, the gun never saw broad adoption. Only 1000 prototype units were manufactured, some of which briefly saw field trials with the German military, but the Bundeswehr ultimately chose to adopt the G36 instead. Its history makes the G11 virtually impossible to obtain today, and even if you could find one of the prototypes, getting any of the experimental ammo would prove to be a monumental task as well. A G11 would be an absolute crown jewel in any firearms collection. As a substitute, I would love it if someone could design a drop-in G11-style chassis for the Ruger 10/22. No doubt this would not be an easy feat, but I think it would be a tremendously fun range toy if it could be achieved, and a definite head-turner. 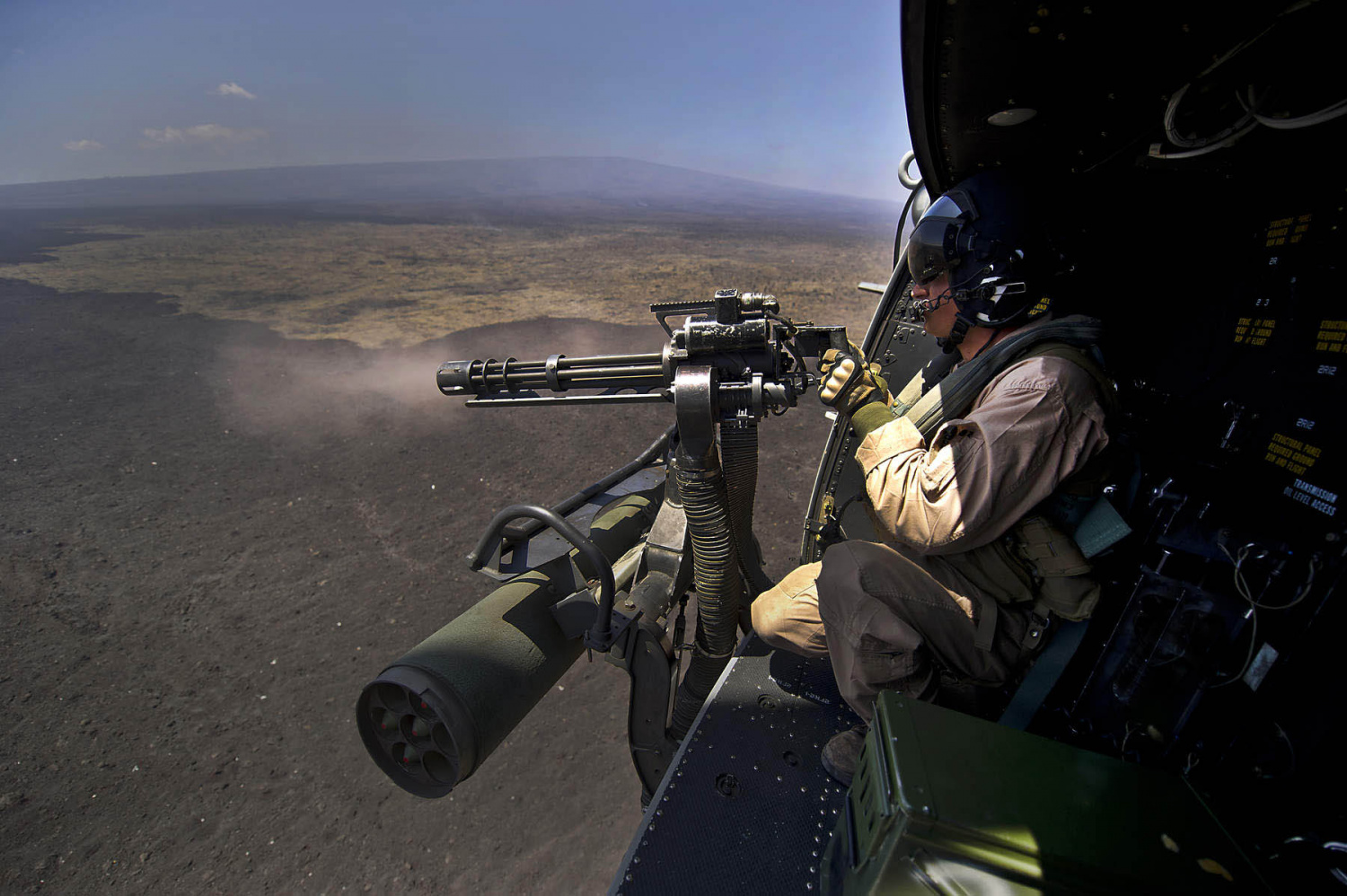 A US Marine fires an M134 during training in Hawaii. U.S. Air Force photo by Tech. Sgt. Michael R. Holzworth.

If you were to measure success in terms of volume of lead rapidly sent downrange, the M134 Minigun is easily one of the best with its rate of fire reaching a blistering 2000-6000 rounds per minute, that’s up to 100 rounds of 7.62 let loose every second. This is made possible by an electrically-driven rotary Gatling-style design, with six rotating barrels. The Minigun began life in the Vietnam era as a scaled-down version of the 20mm M61 Vulcan aircraft cannon, and has been employed with great success primarily on helicopter- and watercraft-mounted applications ever since. The Minigun is a devastating force multiplier on the battlefield, and looks like it would be an absolute blast to test out. Tragically, I just barely missed out on that chance while I was in the Army. In Afghanistan, my Infantry company got assigned to a Special Forces company, and they actually had an M134 in their arsenal. During that deployment, I befriended one of the 18 Bravos (the Military Occupational Specialty designation for an SF Weapons Sergeant) involved in their unit’s weapons training. One day we were discussing the Minigun, and he had the idea to organize a range day to refresh his team on some of their weapons familiarization, as well as allow some of the 10th Mountain guys like me the chance to get our hands on some cool guns we wouldn’t otherwise be able to try – Minigun included. It was just my luck that on the appointed day, our base received a mortar/rocket attack, which necessitated postponing the range. It never got rescheduled, and so I never did get to push that amazing BRRRTTTTT button.

Although acquiring an M134 as a civilian is not impossible, it is prohibitively expensive. There’s at least one company that I’ve found which specializes in rebuilding decommissioned Miniguns and offering them for sale. However, as you might expect, getting this done and purchased would run you well into the tens or hundreds of thousands of dollars. If you weren’t born into generational wealth, won the lottery, or happened to purchase a massive amount of GameStop stock back when it was trading at sub-$5/share, best of luck. It would be pretty amazing to have one of these behemoths in your collection, to be sure – though the ammo costs alone might bankrupt you anyway, given that rate of fire! 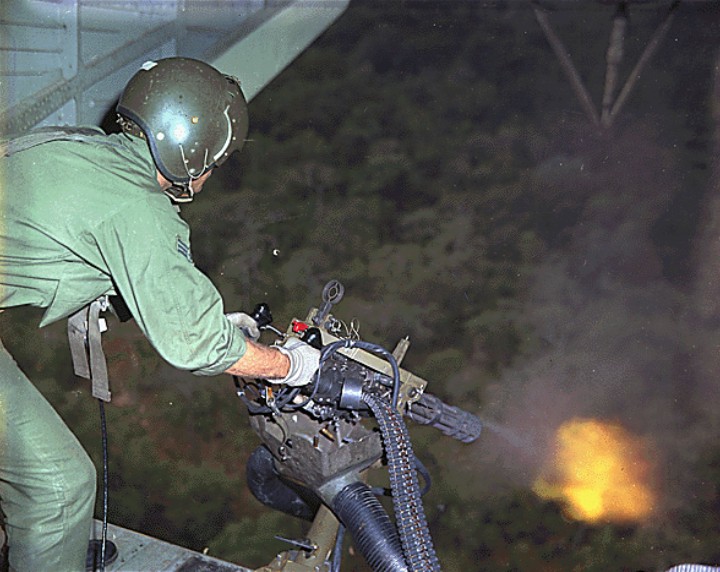 A USAF helicopter crewman fires a M134 during a patrol over Vietnam in 1968. Photo by USAF SSgt Paul Hagerty.

That’s just a sampling of some of the many hard-to-get guns I’d personally love to have – there are many, many more. What do you think, readers? Agree or disagree with any of my picks above? Do you also think that those are cool guns that it would be sweet to have? Do you think any of them are dumb and you wouldn’t want them? What other “unobtanium” firearms would make your list? Please let us know your thoughts in the comments below! See you at the range.

All photos public domain, courtesy of their respective creators as noted, via Wikimedia Commons.