For those of us who love a good wheelgun, especially the old ones (I am talking about the really old dogs out there around 100 years old) one element about those revolvers you likely wish was better or more 21st century are the triggers. Most have horrendously heavy double-action trigger pulls, and although the travel is shorter in single-action, even the single-action pull is heavy. This shouldn’t be surprising considering the leaps and bounds in technology, revolver design, and the firearm market’s vigor for improved triggers that we have today that did not exist back then. If you happen to own an M1895 Nagant (3 TFB Staff Writers now own one – we’re bringing them back and making them cool again), there is an incredibly easy hack or trick you can do to improve the trigger. The M1895 Nagant trigger job we are going to show you today was suggested to me by Mike Stannard, Manufacturing and Export Manager of Tornado Technologies, after I received my revolver back from being threaded for a silencer.

The best part about this M1895 Nagant trigger job is that it requires very little tools and it does no permanent modification to your revolver. I would also file this under the category of “You’ve Got to be Kidding Me.” When I received my M1895 Nagant back from Tornado Technologies and it had been successfully threaded, Mike suggested that if you put a bullet under the mainspring it cleans up the trigger quite a bit. Now, Mike knows a lot more about the M1895 Nagant than I ever will, but I immediately thought this was crazy and he was pulling my chain. Spoiler alert, but it actually works! I believe this is one of those moments where people from the military would say, “There’s no such thing as a stupid idea that works.” I am probably playing checkers while Mike is playing 3D chess, but follow along as we show you how this works.

We won’t be going over here on how to disassemble your M1895 Nagant revolver, but it is pretty easy. You will want to remove the cylinder and side plate in order to get at your mainspring. Then, you simply need a bullet of your choosing. I started with a .357 Magnum bullet I pulled from a loaded round. I took a flathead screwdriver to bend the mainspring a tiny bit and lay that bullet flat into the frame (that way I could put the side plate back on if I wanted to).

I tested the trigger pull from single-action before doing any modifying and it maxed out my 8 Lbs Wheeler Trigger Pull Gauge. It was close to “registering” so the factory single-action trigger pull is likely on the order of 8 – 9 Lbs in pull weight. Then, I tested the pull weight with a .357 Magnum bullet laid down in front of the mainspring, and it tripped the trigger at 3 Lbs! I was speechless. Did I pull the Trigger Pull Gauge wrong? Did I break something? The answer to both questions was No. The trigger went from feeling like a junky Remington 870 to that of a target rifle – with no take-up and nearly no travel to break. 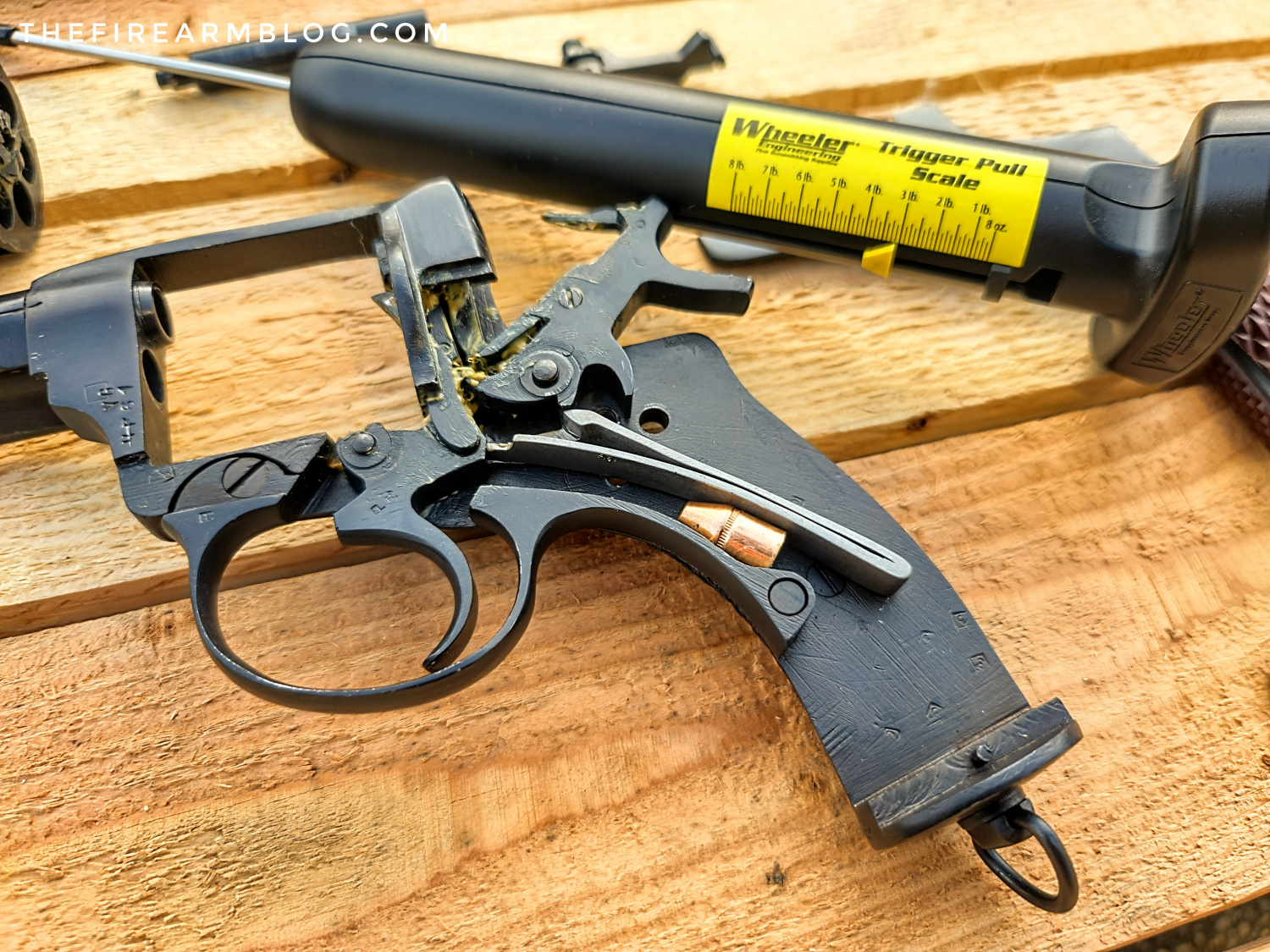 Placing a .357 Magnum bullet under the mainspring dropped the trigger from 8+ Lbs to 3 Lbs

Now for the bad news… with the bullet orientated as such (laid down) it eats up so much pull weight and bends the mainspring so drastically, the trigger will not reset for you to shoot from double-action. However, if you are OK with this, you can manually cock the revolver into single-action for every shot and it works just fine. Being as I will never use this revolver for hunting or defense, and have no authentic need to shoot it from double-action, I would actually be alright with this compromise: incredibly light trigger with no option to shoot double-action. 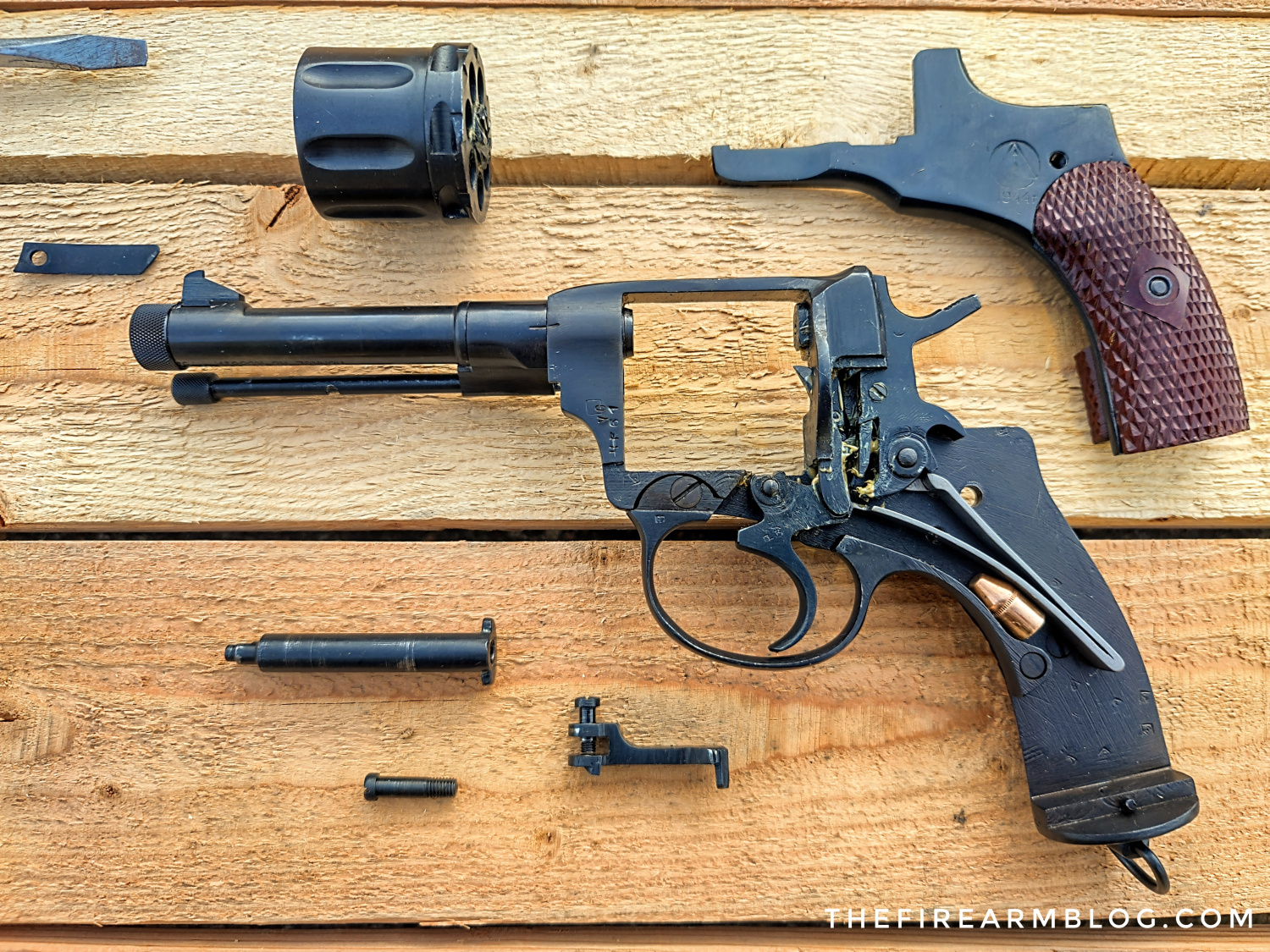 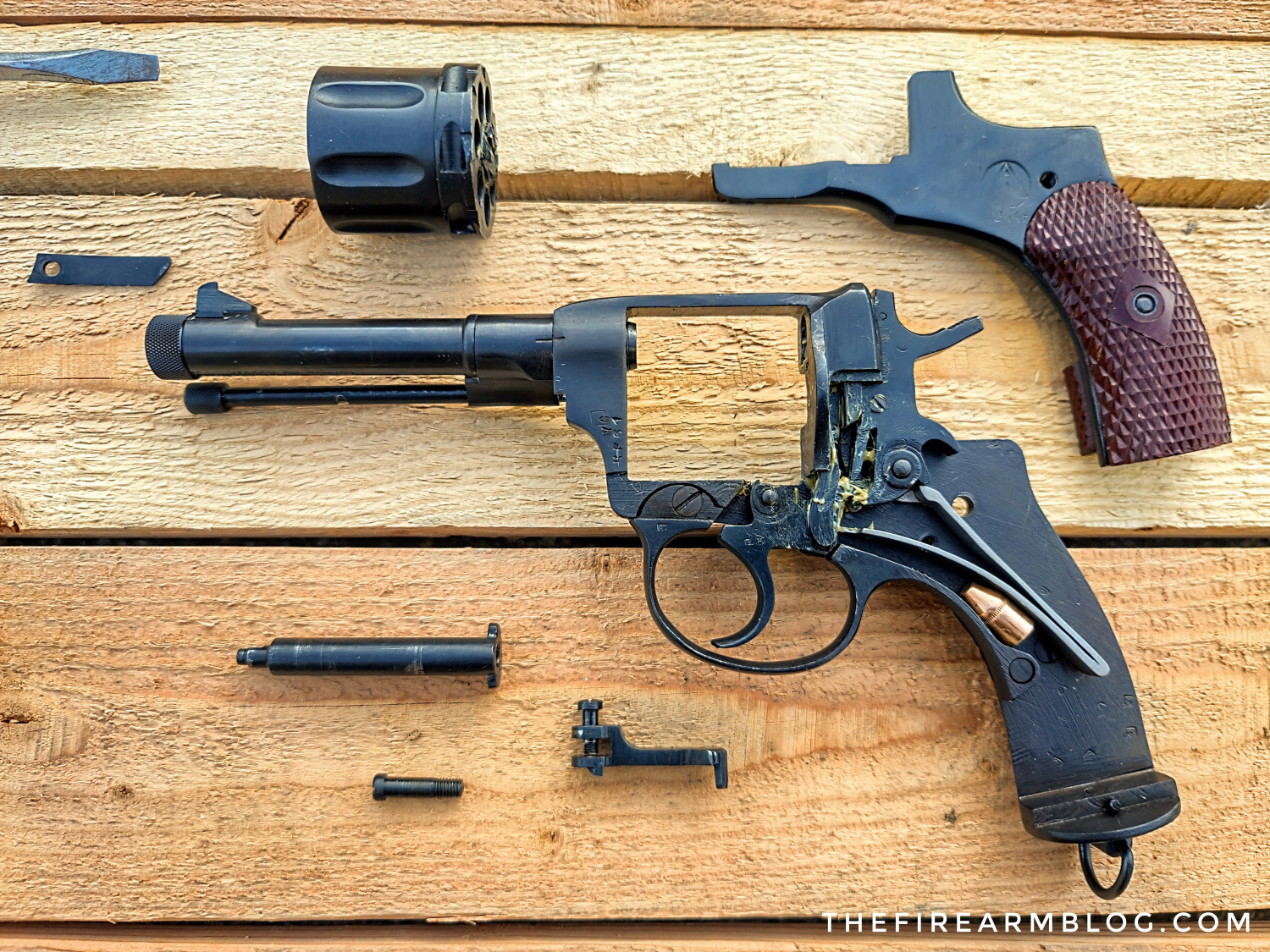 If you push the trigger forward manually the trigger will then reset, but with our .357 Magnum bullet trigger job, it will not accomplish this on its own; it will always require assistance with the bullet in that “laid down” orientation.

While I would honestly be happy enough with this current modification to have squirrelly fun at the gun range, my accomplice-in-crime and TFB Staff Writer Samuel Schaust said we can do better so we tried some more iterations of this shadetree gunsmithing project. Next, we orientated the bullet so it was standing upright (pointing perpendicular out of the frame). This successfully allowed the trigger to reset so you could shoot both double-action and single-action. Simultaneously, with less pressure and bend being applied to the mainspring, the trigger pull weight results were less impressive.

With the .357 Magnum bullet inserted vertically or perpendicular to the frame, we got trigger pull weights of roughly 7 – 7.5 Lbs. This was a bit uninspiring since that only shaved off maybe 1 Lbs in pull weight. On the upside, we did effectively restore the ability to shoot double-action. 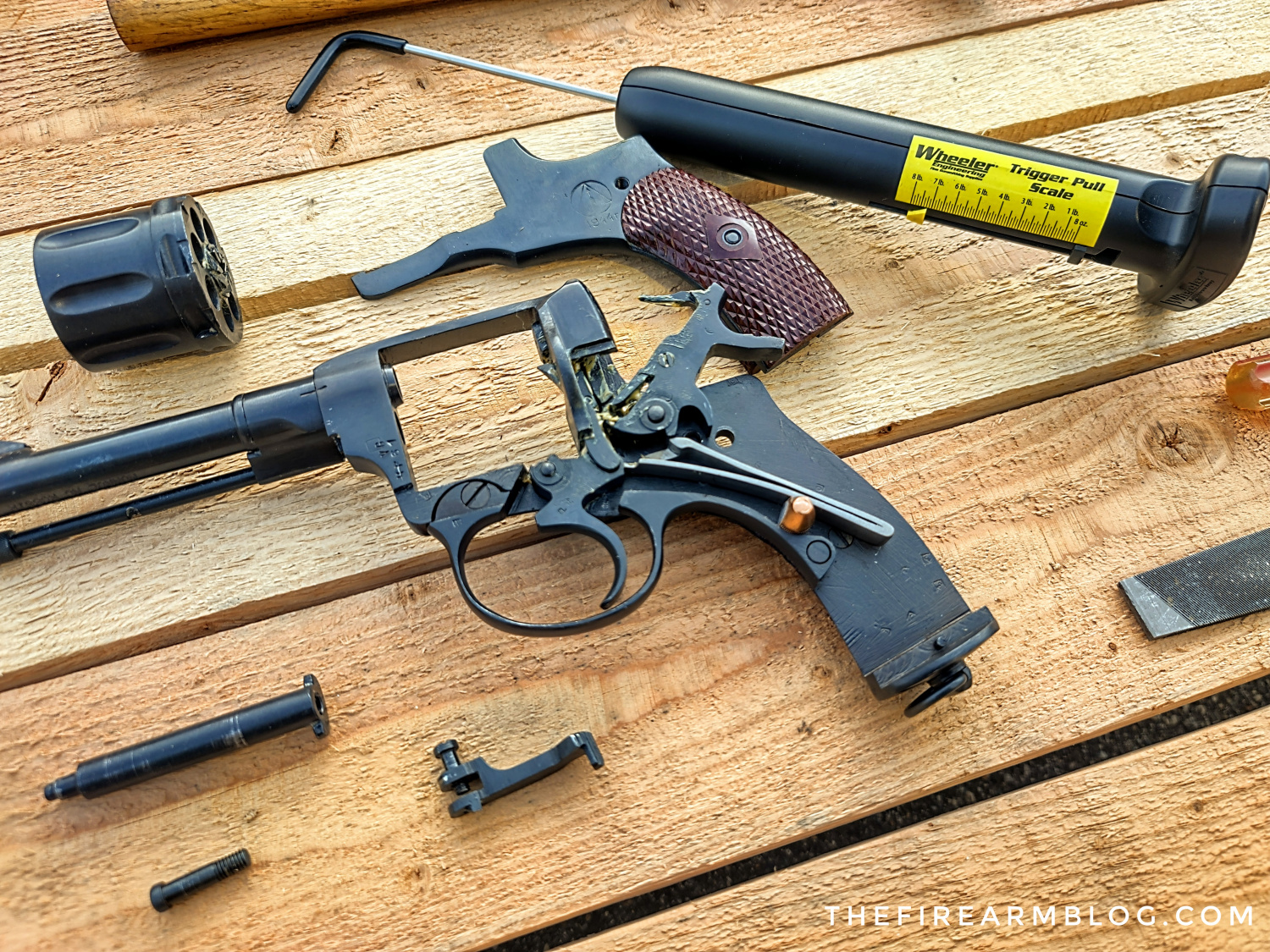 With a .357 Magnum bullet inserted vertically or perpendicular to the frame, the trigger pull weight improvement was less dramatic going from loosely 8 1/2 Lbs down to 7 1/2 Lbs.

Some other important things to note throughout this Nagant trigger job process is that the double-action pull – regarding weight, travel, and the smoothness of movement – never improved at all. So, adding a bullet of your choosing only improved the trigger from single-action. Also, you will notice in a few photos that I filed down the bullet I used. I did this for the 1st iteration so when the bullet was laid flat I could successfully put the side plate back on and re-assemble the revolver. If I wanted to re-assemble my revolver with our 2nd iteration in mind (bullet standing vertically), I would need to file down the bullet considerably to close the side plate again.

This whole process seemed coo-coo when we started, but now my interest is piqued. I believe if you played around with the bullet diameter (maybe tried a 9mm, .30 cal, or even .25 ACP bullet) you could find a sweet spot that not only drops the trigger pull weight significantly, but also resets the trigger to fire double-action. Add in a bit of file work to get it just right and you could have a wickedly nice trigger that does no truly permanent modification to your wheelgun. So, after it is all said and done, what did you think of this M1895 Nagant trigger job? Would you give it a try? As always, let us know all of your thoughts in the Comments below! We always appreciate your feedback. 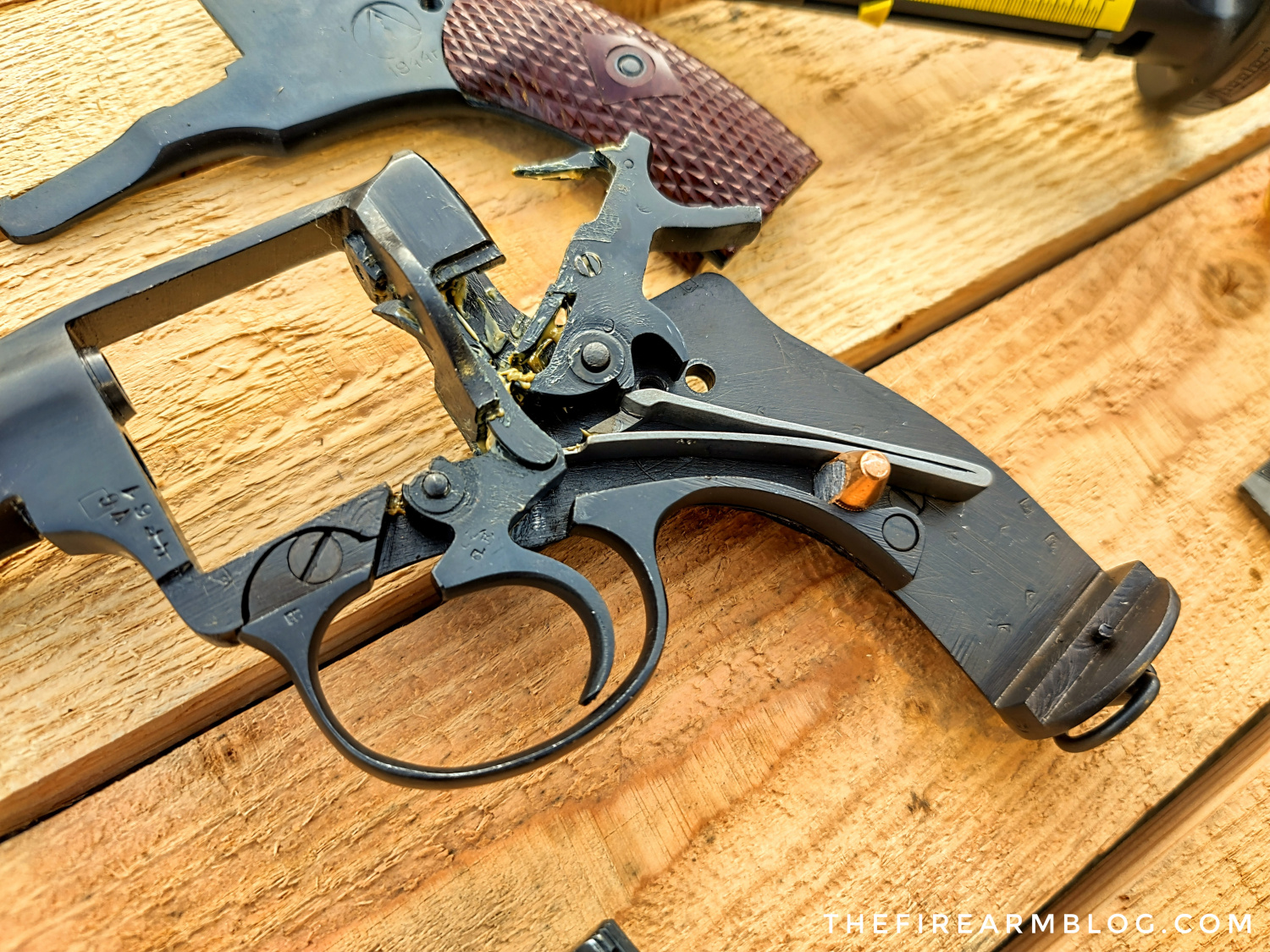 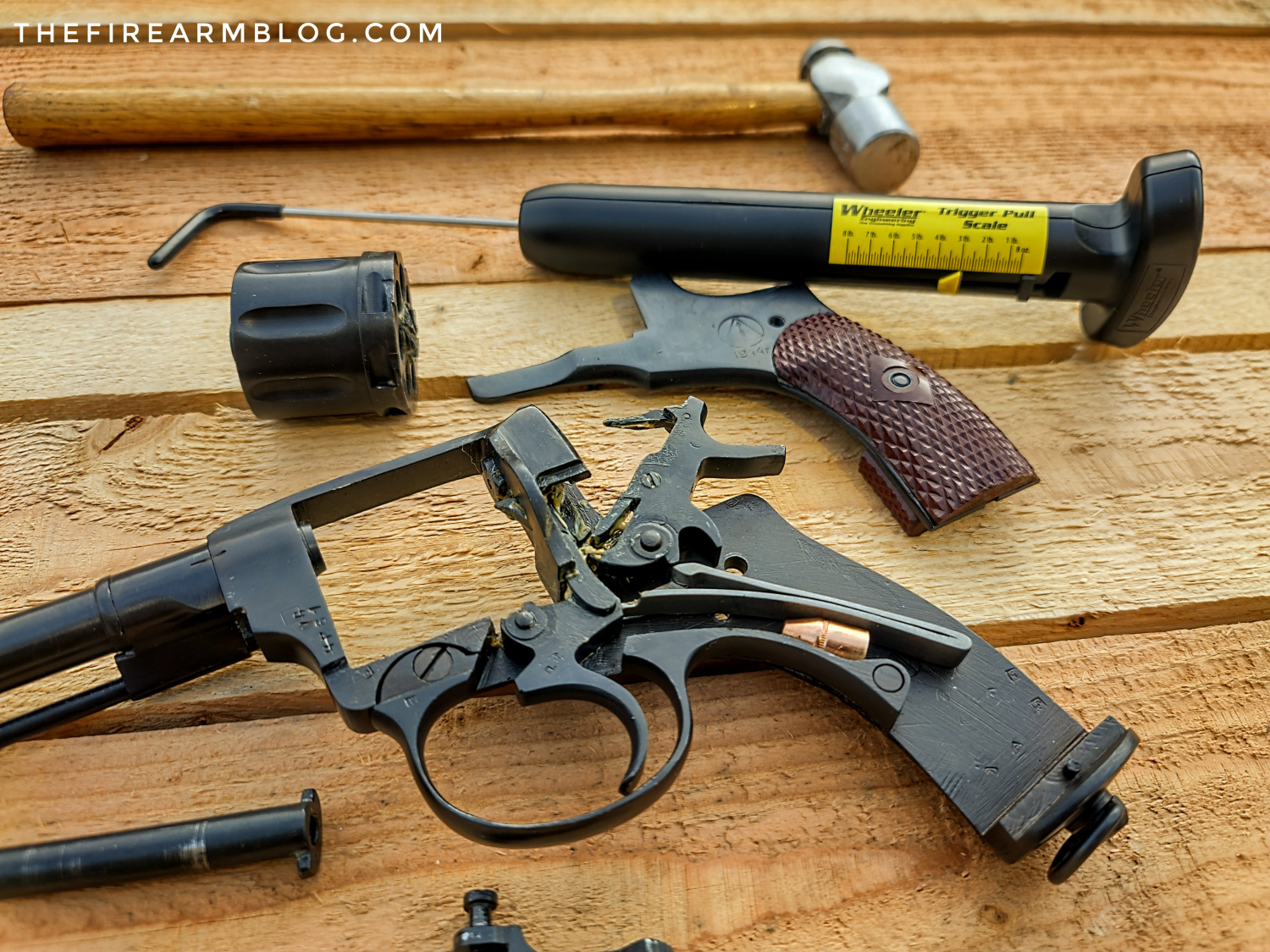