Wheelgun Wednesday: The 18-Shot Revolver of Maximilian I of Mexico

Premier auctions of Rock Island Auction Company always contain a number of rare, unique and historically significant wheelguns. About a month ago, we published an article telling about Elmer Keith’s No. 5 Colt SAA revolver that is consigned to the September 2021 Rock Island Premier Firearms Auction. In this installment of Wheelgun Wednesday, we’ll take a look at another interesting gun found in the catalog of this auction – an 18-shot revolver that belonged to Maximilian I of Mexico.

Ferdinand Maximilian Joseph Maria von Habsburg-Lothringen (1832 – 1867) was an Austrian Archduke, the younger brother of Emperor Franz Joseph I of Austria. He had a remarkable military career quickly becoming the commander-in-chief of the Imperial Austrian Navy. In 1864, after the Second French Intervention in Mexico, he accepted the invitation of Napoleon III to become the Emperor of the Second Mexican Empire. After the end of the US Civil War, the French withdraw their forces from Mexico and President Benito Juarez, who was supported by the United States, regained power. In 1867, Maximilian I was captured and sentenced to death. 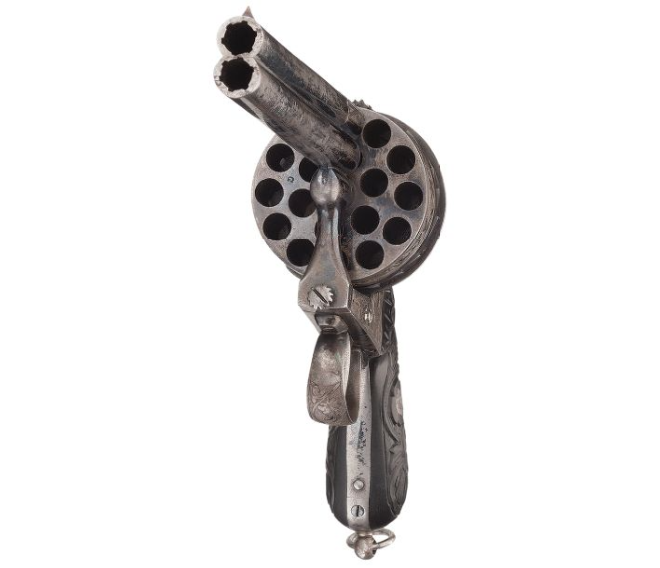 This 18-shot revolver was made in Liege, Belgium in the mid-19th century. Unfortunately, the gunmaker is unknown. It is a double-action 9mm pinfire cartridge revolver with two superposed barrels. The cylinder has two rows of chambers. The 6 chambers of the inner row are fired through the bottom barrel and the 12 outer chambers are for the top barrel. Each rotation of the cylinder alternatingly aligns one of the chambers with the top or bottom barrels. The lanyard ring stud can be unscrewed revealing a pin for ejecting the spent cases. 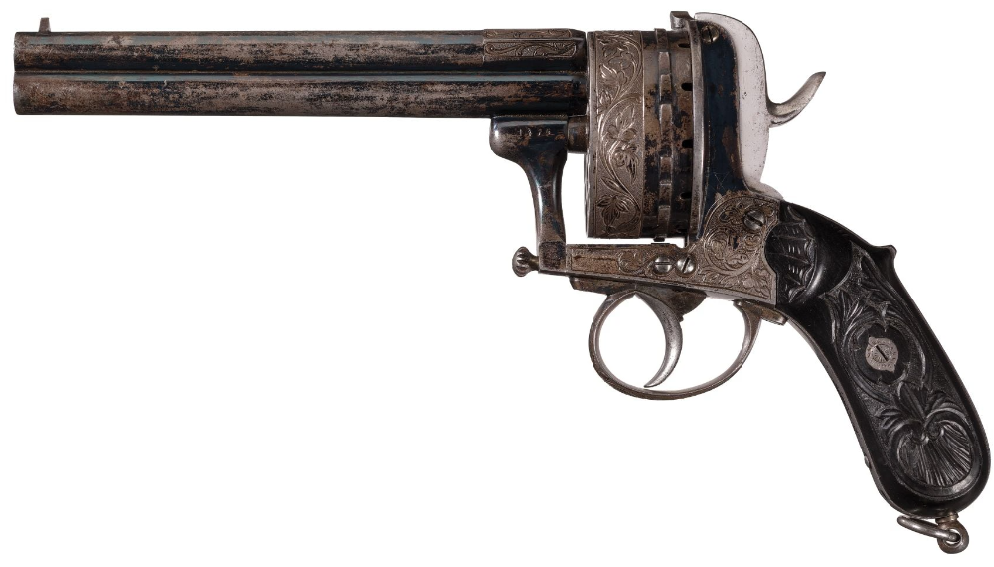 This pinfire Belgian revolver has a blued finish, relief carved hardwood grips and scroll engravings on various parts. The “Ferdinand Maximilian von Oesterreich” inscription on the top barrel indicates that the gun was likely made for Maximilian von Habsburg while he was serving in the Austrian Navy.

The September 2021 Rock Island Premier Firearms Auction will take place from September 10 to September 12, 2021. This particular lot will be auctioned on September 11 and the estimated price range that it will be likely sold at is $27,500 – $45,000. Besides the revolver, the lot also contains a pendant/medal for a commander of the Imperial Order of the Mexican Eagle as well as articles related to the history and provenance of this 18-shot revolver.