Throughout the 19th and 20th centuries, certain pistoleros stand out as either famous or infamous wielders of the wheelgun, be they exhibition shooters, or in this case, a serious practitioner of fighting pistolcraft.  Periodically on Wheelgun Wednesday, we will take a quick look at such personalities.  This week, let’s find out a little bit more about the outlaw John Wesley Hardin.

John Wesley Hardin was a lot of things.  Born in 1853, he did not fight in the civil war (though attempted to enlist at age 9), but was an ardent anti-reconstructionist in the vein of Jesse James, as well as a rustler, card sharp, murderer, prison escapee, and later, lawyer.  He was a prolific fighter, killing his first man at the age of 15 in a case of asserted self defense (the assailant was a large adult, Hardin a boy at the time).

I am fortunate enough that a relative of mine had the foresight to amass an excellent collection of books about American history from the past two centuries.  One of these books is the 2nd edition of John Hardin’s autobiography, the first edition being largely burned up in a warehouse fire.  In his autobiography, Hardin describes in detail the particular tactics he used in gunfights.

From Hardin’s own account of his first shooting, he shot his assailant several times with a Colt .44 percussion cap revolver.  Per Hardin:

He struck me, and as he did it I pulled out a Colt’s .44 six-shooter and told him to get back.  By this time he had my horse by the bridle, but I shot him loose.  He kept coming back, and every time he would start I would shoot him again and again until I shot him down.

From this first armed encounter, Hardin learned the hard lesson of firing until his opponent was out of the fight.  He writes about an encounter roughly a year later in which he applies this lesson learned, as well as learning a fresh lesson about the perils of off-body carry.  Hardin was winning a card game, but Jim Bradly had no intention of letting him leave with the pot and drew both a gun and a knife on Hardin.  Hardin had put his revolver in the corner of the room along with his boots and had to run out of the house unarmed.

He eventually received another pistol, a Remington .45.  Soon after, Bradly came upon Hardin, fired twice and missed.  Hardin did not miss, hitting Bradly in the heart and the head.  As his opponent was falling to the ground, he begged for mercy, but Hardin “did not want to take chances on a reaction”, and kept firing until the crowd ran off and Bradly was stone dead, out of the fight for good.

Hardin was also noted for his accuracy with a pistol, often shooting men through the eye or in the head, as well as center mass.  Like John Mosby, he also knew well the practical range of pistol fire, and used it to his advantage in long-range gunfights, holding his fire until he closed to an effective range.

Hardin in a fight with Mexican herders, who had wasted their ammunition inion at 150 yards. Hardin rode in close, and dispatched 5 out of 6 of them. Illustration by R.J. Onderdonk

Shortly before his death, he shot and signed playing cards that display rather tight groupings for a double-action revolver of the time (Hardin had, in later years, a double-action .41 Colt Lightning as well as a DA .44-40 Smith & Wesson Frontier).  Due to his firearm choices, it seems that Hardin gravitated towards new firearms technology when it became available.

Hardin’s preferred method of initiating a gunfight was to commence with a double barreled shotgun and. then quickly transition to his revolvers. At the age of 15, in laying an ambush for cavalrymen sent to arrest him for his first killing:

I brought it on by opening the fight with a double-barreled shotgun and ending it with a cap-and-ball six-shooter.

Later, Hardin famously killed Sheriff Jack Helms with a blast from his shotgun as well.  Hardin was also a practitioner of “getting off the X”, as he also writes of jumping to the side or seeking cover immediately at the start of gunfights. 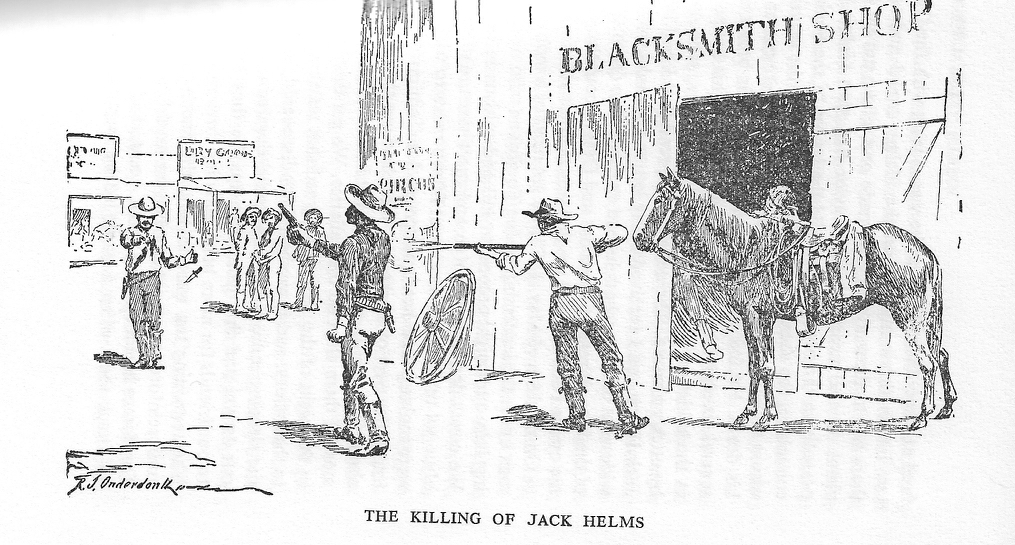 Fractious to the end

In 1895, one year after being released from prison, Hardin was gunned down in El Paso Texas.  He had argued with John Selman Sr. and Jr., a father-son law enforcement family in El Paso.  Later on, Hardin was playing dice, and Selman Sr. shot him in the head from behind.  A prolific killer, Hardin’s hard-learned lessons and skill with firearms enabled him to win upwards of 25 gunfights until he met his end.  Like Jesse James, his killer knew of his prowess with firearms and elected to shoot him from behind.  The .44-40 Smith and Wesson Frontier was found on his body at the time of his death, he never got a chance to draw it.

Source:  The Life Of John Wesley Hardin, as Written By Himself, University of Oklahoma Press, 1961